SEVERAL parties are trumping up the nationalism card on the South China Sea (SCS)-West Philippine Sea (WPS) again and inaccurately inflating the importance of the US military presence in the area.

Megaphone diplomacy doesn’t work on China, and this is shown repeatedly both locally and internationally. Our WPS dispute ignited in 2012 after then president Benigno “Noynoy” Aquino 3rd publicly arrested Chinese fishermen using our navy warship BRP Gregorio del Pilar, which even our Asean neighbors knew was a mistake. Then Foreign Affairs secretary Albert del Rosario further internationalized the dispute in the Asean Forum, which only got our banana farmers and fishermen blocked and areas taken over.

The Scarborough standoff was substantially resolved when PNoy allowed backchannel negotiations through then senator Antonio Trillanes 4th, with the banana and tourism business returning, and China withdrawing over 90 boats and leaving only three.

Del Rosario scuttled the last stage of the withdrawal by turning over the Philippine negotiation to the US, and the China boats didn’t leave. He filed the international arbitration suit; the US got a great PR victory against China, and the Philippines was billed over a billion pesos and left with a reduced territorial claim.

In October 2016, a few weeks after President Duterte’s state visit, our Filipino fishermen were able to return to Scarborough, reporting record catch. In 2021, “there is a peaceful coexistence between Filipino and Chinese fishermen at the shoal,” president of the fishermen association in Scarborough Eric Naboa said, as reported by Inquirer.

In the current Ayungin incident, through peaceful discussions, the resupply mission proceeded within a few days. In the Julian Felipe Reef incident, the Chinese ships went from 200 to nine — both within a few days after Defense Secretary Delfin Lorenzana talked directly with the China Ambassador Huang Xilian. The drawdown of Chinese ships happened a week before the US warships arrived; China was not scared off as declared in Western media including by Forbes, Inquirer, and even Esquire who got in the fray.

In world affairs, China and the US agreed on climate change cooperation, China fast-tracked the increased delivery of medical supplies, release of the Canadians, better management of international goods shipments and financial markets through direct discussions between the teams of Xi and Biden.

Trump’s trade war and tariffs only led Americans paying for record prices, and the US trade deficits are at record levels. Secretary of State Antony Blinken’s declaration of superiority in Anchorage got a counter lecture from China. The US legislation against Hong Kong did not stop the security laws or arrests in Hong Kong.

Taylor Fravel of Massachusetts Institute of Technology found that China had resolved 17 out of 23 disputes with 12 out of 14 neighbors, through negotiations, not without skirmishes, but overall peaceful.

It is right that we should protest, push back, and suggest when it is in our interests WITH RESULTS. Incidents like the Ayungin will continue to happen but should not be the “be all and end all of relations.”

Secretary Locsin or Lorenzana don’t raise the fact that the US is the biggest violator of Philippine internal waters, pointed real guns at Filipinos at Tubbataha, betrayed Philippines claims on Sabah, and even ignored Locsin’s threats. They don’t raise the fact that the Vietnamese are the most frequent poachers in Philippine waters and actually stole Philippines’ Pugad Island (Southwest Cay), that the Indonesians blew up dozens of Filipino fishermen boats and arrested our fishermen, and that Malaysians refuse to discuss Sabah. Our Filipino coast guard shooting dead a Taiwanese fisherman in disputed areas or our botching up the hostage rescue of Hong Kong tourists in Luneta did not dominate our relations. We don’t go on harping about it; instead, we are expanding cooperation with them.

“Filing diplomatic protests is a reasonable response, but why did Locsin need to involve the US, which is not even a signatory to Unclos? Why would the Chinese use water cannons now when the resupply missions have been taking place since 1999?” asks regional analyst Anna Malindong in a webinar hosted by IDSI.

In 2014, roughly a month before the signing of the Enhanced Defense Cooperation Agreement with the US, the Philippines also sent a “re-supply” ship but with a crew of Philippine media to Ayungin, which provoked a Chinese response, recounted Professor Malindog. (Backgrounder: Philippine re-supply ships to BRP Sierra Madre in Ayungin usually avoid confrontations with the Chinese Coast Guard. Even after the 2014 incident, the Philippine has been sending monthly air-dropped food and water provisions to our troops stationed there, without China blocking the resupplying.)

“Unclos actually mandates ‘duty to cooperate’ and the Philippine-China Bilateral Consultative Mechanism (BCM) has already delivered significant gains that both countries can prioritize rather than take unilateral actions,” reminds Dr. Rommel Banaloi, director of the PIPVTR Center for the Study of Philippine-China Relations.

The tensions in the SCS revolve around (mis)-understanding, particularly on the correct applications of concepts of territorial waters and exclusive economic zones and that our national laws are still not aligned with international conventions, Dr. Banlaoi also explained.

Even Vice President Leni Robredo mistakenly said that the 2016 arbitration tribunal ruled that the WPS is ours. In fact, the Unclos and the Arbitration Tribunal left sovereignty disputes and disputes over maritime zones to the parties concerned to resolve among themselves.

Going beyond the skirmish

The world today is no longer about military but economic and technology competition. While we must remain vigilant, especially with the appearance of new virus super variants and possible triggers for war, Philippine recovery is on the way. We should model after Vietnam and South Korea, which do not forget their history while expanding productive engagements even with former enemies, the advice given by more experienced successful economic analyst and business practitioner George Siy.

With the US experiencing a 31-year high inflation and Biden’s approval rating sinking, it is also forced to find creative ways to cooperate with China and Russia. Asia and Europe are also working on strengthening multilateralism for shared growth.

Given the undercurrents of the US pivoting 60 percent of its submarines to Asia, the withdrawal from Afghanistan, provocations in Taiwan and Aukus, South China Sea will continue to be a flashpoint in the great power rivalry that the Philippines must avoid being dragged into that has no benefit but only risks the lives of our Filipinos,” warns geopolitical analyst Butch Valdes, also a former undersecretary for education.

Instead of our “experts” saber-rattling or labeling presidentiables as the Manchurian candidate, we can all help the Philippines must prepare for the expected bigger geopolitical headwinds ahead. Keeping out of trouble, positioning and constantly negotiating for our national interest, and building our economy instead of dramatics is the best way for our leaders to serve our kababayan.

Mario Ferdinand Pasion is director of Phil-BRICS Strategic Studies and the chairman of Nat-Fil (Nationalist Filipinos Against Foreign Intervention).

What Has Happened Since Lee Kuan Yew’s Advice To PH 30 Years Ago?

Second wave or extension of the first? 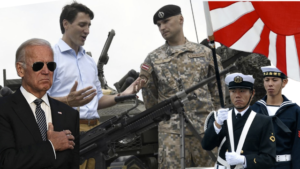 UK study supposedly traced origin to Wuhan, but did not mention Columbia Prof & Lancet Chair Jef ...
frey Sachs saying that C-virus came out of a US biolab, not out of nature. In 2017, NIH headed by Dr. Fauci resumed funding a grant to genetically modify bat coronaviruses in Wuhan. https://t.co/GQfWh8iOUP
Show More

idsicenter
1 day ago
0 0
@VoteLeaveCroy Taiwan is dangerously shaping up to be a powder keg that can easily spiral into a Ukr ...
aine in Asia — Ukraine where tens of thousands have needlessly died and a beautiful land has turned into a war zone. https://t.co/t2I78O56Le
Show More