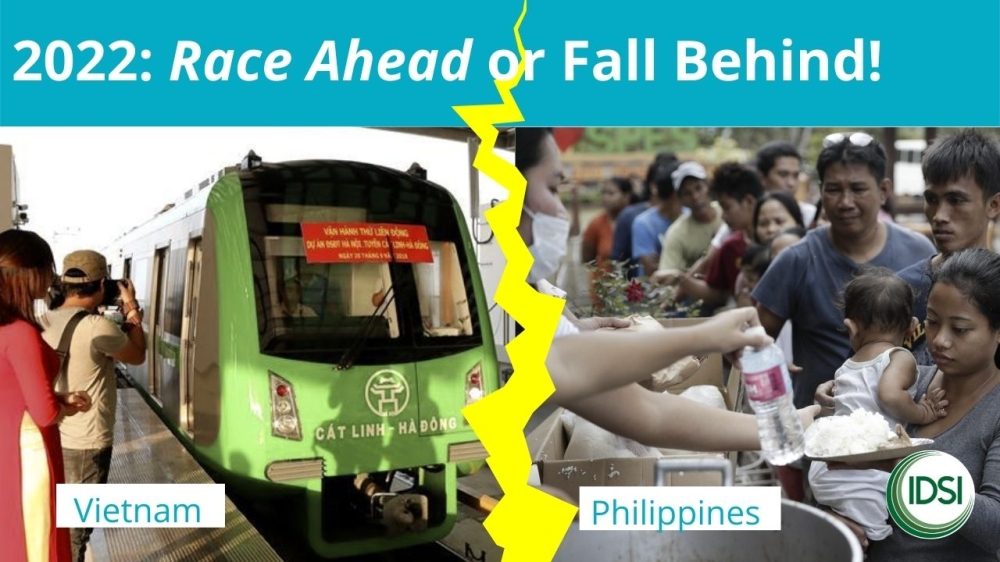 ANOTHER year has come and gone; not counting what is beyond our control, have we improved ourselves vs last year? We will cite some of our Asean neighbors managing well despite the calamities and geopolitics.

Omicron is here; cases are increasing rapidly — as expected. While we must remain vigilant, we also need a more nuanced practical understanding of evolving pandemic variants. For instance, from 1 in 30 of hospitalized mortality from previous variants, Omicron stands at 1 in 833, which is much lower than even most common illnesses.

Some media hype the fears, others point out the statistics that in South Africa and the United Kingdom, which have had it for months — despite rocketing infections at even over a hundred thousand a day in the UK, hospitalizations remain even, and mortality is a small fraction of the Indian Delta variant. Showing that the pandemic can now be managed, we can see a much faster economic recovery than expected, unless a new deadlier variant shows up.

Our economy? Build, Build, Build program’s leveling up of both physical and digital infrastructure all over the country has already started increasing tremendously the asset values, accessibility of people and their products, services, and interactive innovation everywhere. It has made our country a consideration again for manufacturing foreign investments because of improved logistics, and is already generating capital, enterprise and social progress, especially for enterprising people in budding new urban centers all over and will do so for generations to come.

We can compound this improvement further. Beyond the physical enablers, the next leaders will need to develop the softwares of the people — vocational skills, discipline and entrepreneurialism.

Do Filipinos really prioritize this or is it just a paper diploma? Ranking in the lowest rungs internationally for math, science and reading, even President Rodrigo Duterte and Vice President Leni Robredo agree that our education is in a crisis. We need not just education for knowledge but for a culture of setting priorities. We are the top social media users in the world, one of the top video game users, and local gambling has become a top use of funds.

Did we build these digital infrastructure mostly for entertainment? Where are the initiatives and programs to improve our minds? We need both a public-private body to research, apply educational approaches, and an entire cultural reengineering to take place.

With Asean integration and the Regional Comprehensive Economic Partnership (RCEP) promoting cross-labor migration and investments, we need to work doubly harder to upgrade our education offerings that’s attuned with the evolving global market — families and students need to do their part. Else we will either be taken over if we open our country to more investments or be left behind in poverty if we keep doors closed.

Most of the candidates raced to Typhoon Odette’s calamity areas to extend help. Our nongovernment organizations, citizens, clubs and corporations, Armed Forces of the Philippines, Philippine National Police, Department of National Defense, Department of Social Welfare and Development, Tzu Chi, Federation of Filipino Chinese Chambers of Commerce and Industry Inc., business chambers, and Chinoy community are working overtime and have skipped their holidays to provide relief to typhoon-affected families. But it is clear we need better leadership in some agencies that were lax and poor in preparation, organization, commitment or execution.

Extreme weather will continue, not only in the Philippines. Killer hurricanes, storms, heat waves and forest fires in the US; devastating floods in China, Europe, Africa… The destruction of Super Typhoon “Odette”, previously seen only every few years, was also seen last year with typhoons “Ulysses” and “Rolly.”

Beyond incident-by-incident relief operations, we need to seriously implement geohazard zoning and create relief networks to address our centuries-old predictable calamities. “The annual cost of natural disasters is anywhere between 2.5 and 5 percent of GDP,” according to Albay Second District Rep. Joey Salceda, the proponent of the bill for a Department of Disaster Resilience.

The outpouring by foreign countries to donate is a testament to the wisdom of good, or at least non-hostile relations, with all parties. The politicization by some parties even on calamity donations is a reason we will not have more of it.

Why did Foreign Affairs Secretary Teddy Locsin and Inquirer fail to mention China’s donations at all, that it had already donated 10 thousand tons of rice (4,700 tons for Odette), 100 thousand bottles of drinking water, $1 million in cash, 20,000 food packages, while profusely thanking the US and its military allies for “announcements” and pledges (pledges often are not fulfilled or made conditional) to donate?

Goodwill donations in times of need have never been politicized in this way and is not the way to develop more support for our people, but is risking our people for the interests of other countries.

What is a model that has shown higher success than the recent selective way of DFA’s Locsin?

Foremost Asian-geopolitical analyst Kishore Mahbubani points out: “The most important lesson Vietnam learned was to trade even with one’s adversaries… That’s why trade between India and Pakistan only tripled from 1991 to 2021, while trade between Vietnam and China — which had fought a war in 1979 — grew 6,000 times over. Asean’s culture [of positioning but not in a hostile manner], generated peace and prosperity. “

Even the metro rail of Vietnam is being built by China, while some Philippine “experts” prefer to pay far more for other foreign builders. Asean investments by China are now at $110 billion, still behind the US’ over $300 billion over the decades but growing fast. Indonesia just received a $2.7 billion investment from China in both finance and tech in ferronickel, increasing the value added of the commodity by 14 times; the Philippines has a $3.5 billion steel plant application.

Yes, there are territorial disputes and increases in crimes, corruption issues and initial social incidents, we deal with them as we did with the American occupation, GIs, US corporations, and Japanese, Saudis, South Koreans’ adjustment periods — decades ago and today?

Meanwhile, the Philippines benefited from nearly P100 billion tourist spendings a year and received billions of pesos of investments and trade from China. These are on top of the donations and debt forgiveness in the hundreds of millions of dollars. These helped create markets, “cluster-effects”, and an optimism that other Western and Asian groups rode the wave on and also multiplied their investments as well. Ground data pre-processing, and even during the pandemic, attest to this.

On the domestic front, the free education, substantially covered basic health care, waiver of taxes for the basic earners, higher tax collections (pre-pandemic), improvements in the physical and digital infrastructures, the Housing and OFW departments and others are foundational developments that will help propel our country forward.

As we look back and plan forward, with the many difficulties expected as well as opportunities opening up, Asean geopolitical expert Mahbubani sums it up: “The big game is economic, not military.”

This echoes US President Clinton’s “It’s the economy, stupid!”