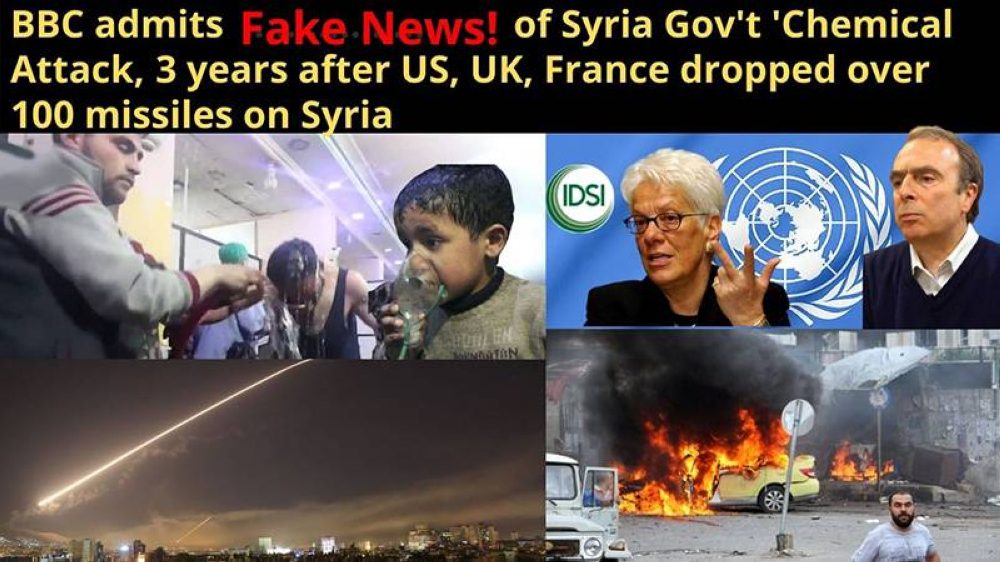 It was a lethal lie that killed thousands. BBC News last month was forced to admit the lies it spread and stood behind for three years: a BBC documentary video used all over the world, made in April 2018, showed children and civilians gasping and being chaotically hosed down, with an announcer narrating breathlessly that these were the horrors perpetrated by Syria’s Assad government. It reported opposition witnesses alleging aerial drops of chemical weapons barrels that killed more than 40 people and injured hundreds more.

This video and narrative was quickly used by the United States, the United Kingdom and France to justify launching over a hundred missiles into Syria a week later without any evidence, just one day before an investigation by the OPCW, the Organization for the Prohibition of Chemical Weapons. Why the hurry?

In 2013, the UN inspector Carla del Ponte already came out in news video clips to say that investigation showed that it wasn’t the government but the opposition rebels who used the chemical weapons on civilians. These clips were removed from the public view and only much later reuploaded by truth advocates.

In 2014, the official closing report of the UN again reiterated that ” the government of the Syrian Arab Republic has completed the functional destruction of critical equipment for all of its declared chemical weapons”.

Why would the Western powers not wait two days for investigation results before bombing?

Some speculate that the 2018 US, UK and French bombing was to obliterate the evidence that the gassing may have been by rebels allied with the White helmets, a supposed NGO supported by the west. Assad, who was already winning the war, had nothing to gain from atrocities that would turn the world against him.

The request by Syria and Russia to investigate the allegations was ignored by the US, the UK and France as were objections by other nations to the military attacks and partial occupation.

BBC’s own Syria producer Riam Dalati three years ago, after six months of investigations, revealed a basis to believe that the “chemical attack by the Syrian government” reported by the BBC may have been staged. But these were belittled by the BBC as personal opinions and were not investigated by institutional bodies.

Dalati also identified one of those in scene as a doctor affiliated with rebel group Jaysh al-Islam, who was filming the chaos and not doing rescue efforts. Dalati tweeted: “Sick and tired of activists and rebels using corpses and children to stage emotive scenes for western consumption.”

The Polygraph defended that the New York Times also “conducted an investigation into the incident… concluding that a chlorine canister was dropped from a helicopter and landed on the apartment building.”

A long campaign for the truth ensued, conducted by different parties, through British journalist Peter Hitchins, through revelations by insiders of the OPCW, testimonials and video evidence dug up by Russia and Syria, and science itself, which revealed the fake news and false science that the BBC and NYT reports were based on, forcing the eventual BBC admission.

Engineering investigator Henderson had concluded, in consultation with other experts, that the positioning, light damage and location of the gas cylinders indicated they were not dropped from the air as reported but manually placed. These contrary reports and all traces of their data were asked by a senior OPCW official known as “Voldemort,” through email, to be removed along with details of inconsistencies in witness testimonies and other findings.

Various whistleblowers within the OPCW provided emails and other evidence of selective use of facts, and actual revisions, to arrive at a desired conviction of the Assad regime, when the overall results provided different conclusions. The OPCW has chosen not to respond to these points and verifications raised.

The BBC initially tried to smear the different whistleblowers, accusing Peter Hitchins, a 40-year veteran of covering Syria, of being aligned with Russia and Syria. BBC then insinuated that an informant known as Alex, who claimed the 2018 chemical weapons attack on Douma was staged, may have been motivated by a financial reward of $100,000, provided by Wikileaks at that…this has been denied by Wikileaks and there is no basis other than the accusation.

Journalists also found several of the supposed “victims, children,” who are in good health and testify they did not know why they were dragged into the videos and hosed with water.

Then came a leaked email – the authenticity of which has been verified by the OPCW – which protested that the scientist’s original findings had been changed. Fernando Arias, director-general of the OPCW, has denied this. But a newspaper has obtained the research team’s original interim report, which differs substantially from the end report, and OPCW refused to comment.

An OPCW whistleblower also revealed that the tiny quantities of chlorine detected were in forms possible to find in any household. The victims shown in videos of the attack were foaming at the mouth, expected of victims of sarin but not of victims of chlorine. But no traces of sarin were found at Douma.

These discrepancies – facts – were not picked up by the British, the US or Philippine mainstream media, but the allegations and even already debunked videos alleging Syrian government’s use of chemical warfare were spread all over the world, long after many of the facts already came out.

However, in fairness, a ray of light and truth still shines, however late and however much damage has been done to nations and millions of people.

The BBC lately has admitted that its reporter Chloe Hadjimatheou spread fake news about the use of poison gas in Douma in its “documentary” of 2018 and had admitted that BBC Radio 4 episodes contained “serious inaccuracies.”

The ECU – Executive Complaint Unit of the BBC, which investigates the standards applied by the organization, stated in a turnaround, “These points represented a failure to meet the standard of accuracy appropriate to the program of this kind….” (Although very recently, just on Dec. 1 2020, a BBC spokesman said, “This series is the result of photojournalism and meets the BBC’s editorial standards…we stand by the investigation.”)

Hitchens, the journalist who complained, welcomed the verdict, and “admits it’s a big step that the ECU of the BBC ruled against itself.”

Lies, inaccuracies, distractions and provocations continue to abound all around us; some are distracting, others are truly destructive. As the stakes grow higher with a superpower rivalry in our neighborhood, and given the propensity to fight wars through proxy, we should all be more discerning and careful in what we believe and how we judge, which we should do with pragmatism and for the long term good of our country.