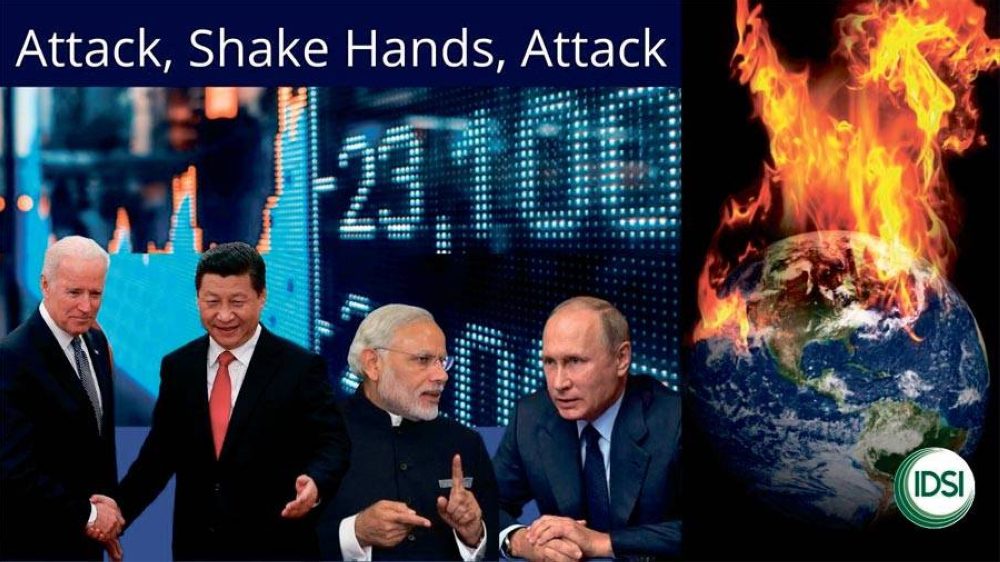 US President Joe Biden is being forced to revise many of the US strategies for world leadership as allies and competitors; even the weather, the pandemic and economics force realities on him. A lot of acrobatics are needed for a man of his age, but he has been handling the balances in practical fashion while still forcefully pushing US interests.

Are we moving toward war?

The increasing formation of military-based alliances in the world in a race started by the US has led to counter alliances between Russia, China and the Middle East.

Increasingly heated rhetoric. A lot of fake news such as accusations by the West of genocide or intended attacks that have no verified basis, and expansion of sanctions and military activity on both sides are creating a mood of fear, paranoia, anger and a higher possibility of “accidents” — which can be deliberately triggered.

How is the US leadership faring in the regard to military and geopolitics?

Russia claimed it fired shots and dropped a bomb as a warning at a British destroyer that moved into the Crimean disputed waters in the Black Sea last June, making it change course. This was denied by the UK. Then Russia released videos and recordings that showed shots were fired but not the munitions dropping. The UK claimed innocent passage, and Russia has warned that in the future the bombs may be dropped on the targets rather than just as warnings. Meanwhile Russia has been increasing military exercises within its territory but near the border of Ukraine.

The US Seawolf attack submarine that cruised on the border of Hainan island in China, seems to have attacked itself, or might have been attacked by an underwater mountain. US spy planes constantly fly around the Chinese borders and have used fake civilian hex codes including that of the Philippine and Malaysia, which can endanger middle countries as justified targets of war.

China is now increasing its stocks as well as its number of submarines and carriers and other navy vessels, after decades of hardly increasing its nuclear arsenal from its 350 against the US’ over 5,500 nuclear warheads. China sees this as necessary given the invasions, arrests, sanctions in technology, finance, trade and others that the US is imposing on the world, as well the history of over 30 occasions when the US contemplated using nuclear weapons on conflicts around the world.

The US military initiatives are through the NATO, QUAD Aukus, and supposed Fonop operations all around the world, an increased budget on what is already the largest military budget in the world, funded by printed money. Offering more finances and military support to the “allies” like the Philippines and Vietnam, creation of hot spot issues like supposed Xinjiang or Hong Kong oppression, larger media budgets Strategic Competition Act of 2021 for “information-campaign” against China at over $1.2 billion for the next four years of funding of foreign media and disallowing alternative views in social media even when evidenced.

On climate leadership, India has stunned the US, which was trying to lead, by asking for $1 trillion for itself by 2020 from rich countries to participate in the reduction in use of coal and carbon emissions, more than all the other poor countries combined, as the position of Prime Minister Modi and Environment Secretary Prasad Gupta in the opening of the UN COP26 environmental conference. “India will not update its NDC till there is clarity on climate finance,” quoted Bloomberg.

India priced this in reference to what poor countries “should see” as a cumulated pollution owed by nations who developed earlier, which now they wish to charge countries still just coming up, but which would be an unequal burden to the latecomer. Shell-shocked US envoy John Kerry says he will “have to look at the details.” Gulp!

Western media accuse unaligned countries without showing that the US and advanced countries have produced far more greenhouse gas emissions in their years, and that many Western countries emit far more per capita.

China, meanwhile, is the leading exporter and user of every green technology — producing 75 percent of the world’s solar panels, is the largest generator of solar power in the world and providing the greatest portion of efficient batteries used in solar, vehicles and cellphones. It is the largest producer and fastest adapter of electric vehicles, designed with the smallest footprint of commercial vehicles and selling at just $4,500 per vehicle. The majority of the reforestation in the world was due to replanting by China in the last decade.

On the economy, the US is beleaguered on various fronts, but it has the magic lamp of printing more unlimited money.

Domestically on the economy, Biden is burdened by ratings that tanked for him and Vice President Kamala Harris, one year from midterm elections, even among those who voted for them (USA Today and Suffolk University poll), due to the attacks of Trump, GOP, Taliban debacle, massive increases in housing prices creating a sense of loss of possible ownership among the young, increasing inflation partly caused by commodity bottlenecks and the US’ unlimited printing of money, unprecedented 30-percent increase in imports from China as the US an economy recovers but no longer has manufacturing, such that the tariffs imposed by the US might have to be withdrawn.

Major US chambers of commerce, thousands of companies themselves and even end-consumers are pressuring the US government to lift the tariffs. Meanwhile many of the US corporations are making the lion’s portion of their income from the China market, even as they fear possible restrictions because of the politics of competition with the US.

Amid these and escalating accusations on both sides, Biden has called Xi Jinping for direct discussions, and sent Yellen to China to discuss cooperation on international finance. He recently sent CIA Director William Burns to Moscow to discuss US-Russian relations with Nikolai Patrushev, the powerful secretary of the Kremlin’s Security Council to bring up concerns as well as cooperation areas. Meanwhile he continues to push US interests and geopolitical balance through military and political alliances, technological means, and most correctly, by developing US infrastructure again.

Seeing the generally ongoing improvements in Afghanistan with the Russians, Chinese and Pakistan supporting but also moderating the Taliban and trying to wean them from extremism, the US is beginning to consider recognizing the role the Taliban might play in a more stable Mideast and trying to portray that the US is leading the effort, even while they froze the $9.5-billion accounts of Afghanistan trying to force a total abdication.

So, while the world keeps edging closer to hot wars, Biden has also initiated many moves toward practical engagement with Russia, China, the Taliban, and a more equal dealing with the rest of the world. Perhaps this is a way of adjusting toward a multipolar world?

The Philippines should learn from the successful nations in the world and adapt with speed and practicality.