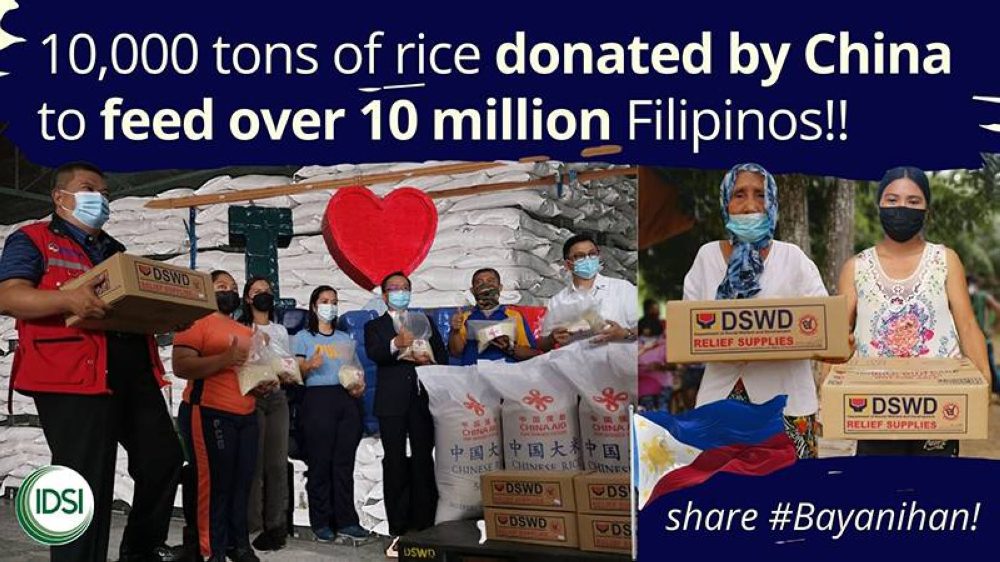 OVER a million Filipino families affected by Typhoon “Odette” are benefiting from China’s donation of around 4,800 metric tons of rice already delivered to the Department of Social Work and Development for immediate distribution to the Visayas and Mindanao.

Why have Rappler and ABS-CBN not reported China’s donation, which was often the first and biggest country donor but is constantly being downplayed? Are good works by China being questioned, while those of others are played up even if much smaller or later?

We should not be counting donation values and just appreciate the goodwill, but some media and countries are politicizing everything, even the Olympics.

Philippine politics and life often experience promises that are publicized but not accomplished. People and countries that have a tradition of being humble about their contributions are learning they must publicize as well, or they are likely to be accused of not helping.

The limited news that reported the China donations started mostly with other foreign aid that were just pledges, without reporting the record of the many pledges that have not arrived, not arrive in time to help, or have expired and were even rejected items like vaccines.

Rappler did not even include China’s donations in its initial December 21 report “Countries offer aid after Odette,” but later did update it. Inquirer’s “Foreign aid pours in for ‘Odette victims” story starts with the pledges (not yet fulfilled) of the US ally countries first, starting with Canada’s commitment of up to CAN$3 million, the European Union’s allocation of 1.7 million euros, South Korea’s pledge worth $2 million, and what Japan and the US “will provide.”

Somewhere in the middle is China’s already-turned-over 10,000 metric tons of rice (about P500 million) and an initial 20,000 food packs (P8 million worth) already delivered. Although in fairness, Inquirer seems to be working on more comprehensive reporting and recently had the picture of the handover ceremony on the front page.

The Chinese Embassy donations are on top of even bigger donations by private Chinese groups, not including the assistance for other calamities such as the Taal Volcano eruption and Super Typhoon “Yolanda,” among others — part of the centuries-long link of China and the Philippines helping each other.

The US embassy did also send 10,000 food packs through the World Food Program, which also reported that Ireland’s 250,000 euro is “the first funding contribution to WFP’s emergency response to Super Typhoon Odette.” Israel also donated around P700,000 worth of groceries and solar-powered generators to Cebu.

Lack of research or biased reporting?

Some of our “experts” and politicians would frequently complain, “Where are the benefits from China?”

Rappler has also not reported the recent China donation of 2 million doses of Sinovac that came on December 17, nor on the expiring rejected Western vaccines being “extended in useful life” for Filipinos. Rappler reports whenever Japan and the US are “to donate,” i.e., future pledges.

Rappler regularly quotes Reuters but has not reported on the conflict of interest that the Reuters CEO is also a board member of Pfizer and is already promoting for a fourth booster shot while increasing Pfizer’s prices by another 25 percent. But it was quick to report on Reuters report of a “study” that “antibodies from Sinovac’s shot fade….”

Most of the media reported on the China-donated Estrella-Pantaleon Bridge as “China-funded” (implying it was just a loan). The Binondo-Intramuros Bridge is also a donation by China — worth over $100 million. Some media reported the few dozen China technicians and specialists as “stealing Filipino jobs” despite the project training and employing hundreds of Filipino workers even during the pandemic. A western donor would be “lending expertise” or “utilizing consultants” without mentioning we pay very higher rates for them.

As of 2021, China has already donated 5 million vaccines despite late orders, upon request of our people when it turned out the US and west were blocking vaccine exports. China rushed-delivered 52 million doses, consisting of about half of our national supply and inoculating around 23 percent of our population.

Another fact that none of the media has written? Given the 2 billion shortages in syringes worldwide, each China vaccine includes a syringe, while we must procure our own syringes for the Pfizer vaccines.

This is on top of the over a billion pesos worth of donated medical supplies, test kits, protective personal equipment, face masks and other life-saving equipment during the height of the pandemic, including donating PPE qualified fabric for Philippine production when there was a worldwide shortage and the US was hijacking supplies from her allies.

China also sent 12 scientists and doctors in the early weeks of the pandemic to provide knowledge transfer to our Filipino doctors when the world was caught ill-prepared to combat the invisible enemy. Though it took months later before their advice of the necessity of centralized monitored quarantines, and early preventive supplements, would be adopted nationwide.

At the height of the Marawi siege, when our soldiers were running out of bullets, China and Russia also rushed-delivered emergency weapons when the US and Western initially blocked the arms delivery. President Duterte later revealed that the rifle that killed militant leader Hapilon was from the China-donated batch, but some media were quick to scramble it as “supposedly.”

More than charity, real assistance for economic recovery and development

In the first 10 months of 2021, the Philippines’ exports to China grew 15 percent, totaling around $18 billion and accounting for 30 percent of the country’s total export volume. In the first half of 2021, China’s investment in the Philippines increased by 230 percent compared with 2020, non-financial direct investment increased almost 40 percent reaching over $110 million. These trade and investment are on top of the cooperation in scientific and technology, people to people, our 300,000 OFWs in China. Professor Anna Malindog of Phil-Brics expands on the major cooperation in “Renaissance of Philippines China Relations”.

The toxic bias of our politics and decision-making must be changed to allow us to gain the best combination of benefits from all sources, at least until our people have the basic dignity of food, health, housing, practical education and employment. At that point, perhaps we may have the luxury of making choices based on preference rather than practical benefit. Otherwise, our constant philosophizing will be keeping our people at just the edge of survival.

To be a progressive country, we should stop the demonization and biased reporting, and make the most of everything and show appreciation. Most importantly we must do our studies, work harder and smarter than most others — despite any calamities, presidents, obstacles and myriad excuses.

While much help is needed, there is also much to be hopeful. Happy Holidays!

Mario Ferdinand Pasion is director of Phil-Brics Strategic Studies and the chairman of Nat-Fil (Nationalist Filipinos Against Foreign Intervention).