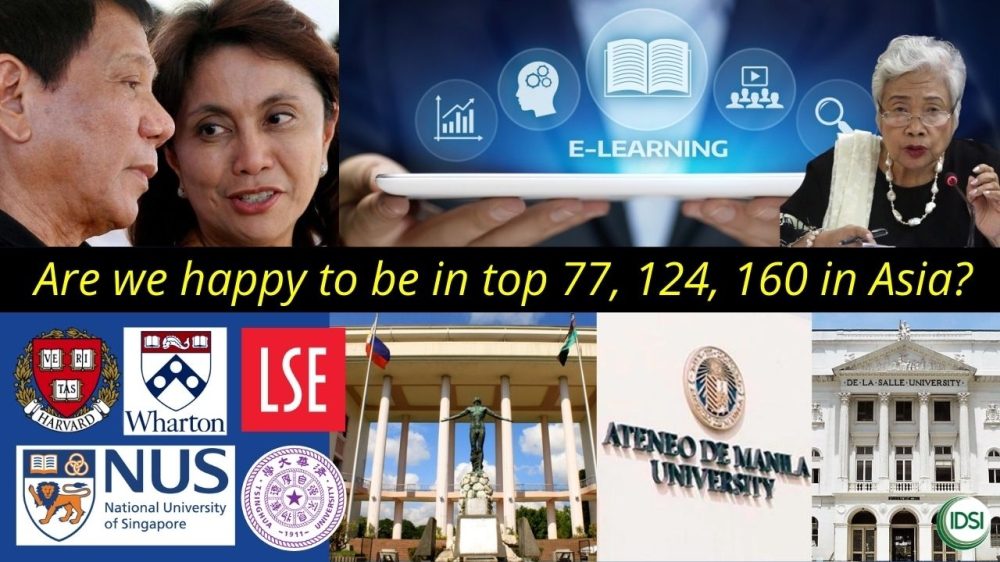 PRESIDENT Duterte and Vice President Leni Robredo have come to agree that education is in a crisis that needs addressing. Kailangan natin ito! Did you ever think they would come to agree with each other on anything? It’s a step in the right direction; there is hope for the country — sort of.

The World Bank was asked to apologize for declaring the crisis in the Filipinos’ bottom-dwelling performance in math, science and language — the components for succeeding or falling behind in the next stage of world development. Various international and local tests over the years had confirmed this dismal performance of Philippine learning.

What can we do about it? What is the ground situation? Is it a problem of the education system in schools or poverty? Or is it a much larger (and also much simpler) problem of culture? What is needed to improve?

Lamentably, Duterte ‘s initial response was “Mahirap kasi tayo,” forgetting that South Korea, China, Hongkong, Vietnam and others were much poorer than the Philippines a few decades ago, did not speak English, where people were dying of war and famine, but are now top performers in not only math and science, and in English as well (at least in written English). They are outperforming even most of the developed world in business and technology as well.

Lack of funds is true, but it is not the issue. The decline is one that has been happening over the past decades as shown by the “achievements” of the Philippines in the Trends in International Mathematics and Science Study (TIMSS), where we placed 58th over 58 in 2019, and in the Program for International Student Assessment (PISA) in 2018, where we had a spectacularly low performance of 79th of 79, and as corroborated by local tests as well.

The various PISA exams analytics showed that in Confucian countries and in those culturally valuing education, the lowest income deciles can perform nearly as well as the top deciles, outperforming even richer countries. This was of course never reported in the US media and only a few European Union media like Agence France-Press.

President Duterte made college education substantially free, significantly improved the compensation of our teachers, induced not only our public but private educational institutions to innovate as well, forced the acceleration of cellphone access facilities that improved by over 100 percent in his term, among other improvements. President BS Aquino 3rd built in his term the classrooms that covered the shortages in the country.

The hardware is only as valuable as its software and the correct application, and families and students need to do their part.

Many criticisms of our administration and strategies for education are true, but the majority have been overcome by other nations. And if our people are willing to work at these, we can also overcome.

While true that the urban areas may have some nearly 50 percent access to internet vs less than 15 percent in the rural areas, statistics show that for those who have access, the average usage of the Filipino of some 10 hours a day on the internet, over 6 hours is spent on Facebook and of the rest, much is on chit chat, Netflix and YouTube, online gambling. While almost all knowledge can be learned from the world’s best from YouTube, Podcasts, etc., mostly for free, videos on lovers cheating, family feuds, and betrayals garner tens of millions of views, while the educational videos are lucky to get tens of thousands, often less than a hundred. Although a positive trend is emerging of a growing class of Filipinos watching entrepreneurship videos; whether this can be sustainable is yet to be seen. Further, Filipino men and women are the world’s top users of Pornhub. And DSWD statistics show we have the highest rate of teen pregnancies in this part of the world.

It has also been noted that for those with access to online classes, many students are not listening to their Zoom classes — often chatting or playing video games , watching Netflix or doing something else, and having their parents complete their assignment. Just ask the parents.

The top Indian technology universities’ acceptance today require a perfect GPA for core course requirements to even be considered — amazing and excessive according to many pundits. An investor in video games in India says the students focused on their studies and were monitored by their parents; multiples more money was spent in the Philippines for a popular multiplayer game than by the Indians

China has recently restricted the number of hours children can play video games, limited the playtime to weekends, and even limited the games marketed by their tech champion Tencent, causing a large drop in stock value. China is paying a price in both money and criticism.

It is true that we have issues with curriculums, and pedagogy in most areas, and famously inaccurate online courses (proving even our course writers and editors have low levels of proficiency?) with very basic errors as exposed every year by some vigilant watchdogs.

We should be cognizant of the openness of the Education Department, even as it asked for a World Bank apology for pointing out the weakness of Philippine education. The results were not disputed by Education Secretary Leonor Briones. Undersecretary Diosdado San Antonio acknowledged the quality assurance deficiencies and opened a digital site to accept and review public citing of corrections.

Why have we failed, after over 50 years, to arrive at an acceptable standard for locally produced education material?

Our modes of adjustment reflect the lowering of standards that we accept in most things. In many schools, even in top universities, some schools simply lowered the standards of grading, or even of passing work assignments.

The TIMSS test on science showed 13 percent of Filipino students were on the low benchmark, which means they had “limited understanding of scientific concepts,” while 87 percent did not even reach this level. Similar results were shown in math.

The tests revealed another most fundamental problem brought up by the World Bank. In the low “growth mindset” among Filipino students —only a third of students in the Philippines believed “they can become more intelligent.”

What will happen to Filipinos in the 4th Industrial Revolution?

Today we are still OK and growing based on OFWs, which we pay for with broken families. And BPOs, while still growing, rely on cost and may be reduced by automation. Tourism will revive. But will we be part of the new industries?

Yes, our brightest are proving themselves the top students at Yale, Wharton, Harvard, Stanford, UK Imperial, LSE, NUS, Tsinghua, Beijing etc., but a nation does not progress by its few blessed people, but by creating the tide that raises all boats. We have to aim for the “shared prosperity — and meaning — for all” goal, rather than the pure talent-luck-grit competition model.

Of education, Duterte had said the problem is best left to his successor in the 2022 national elections. “I hope the next administration will be more competent than us now… and more productive than us now.”

We hope Mr. President that we can do more even today, as early steps, no matter that they are small, become big earlier. We hope Bongbong, Leni, Pacquiao, Ping, Isko, whoever is running for president, please study the situation of education today. Win or lose, help us lift the Filipino from the basement to the sunshine — where our people deserve to be.