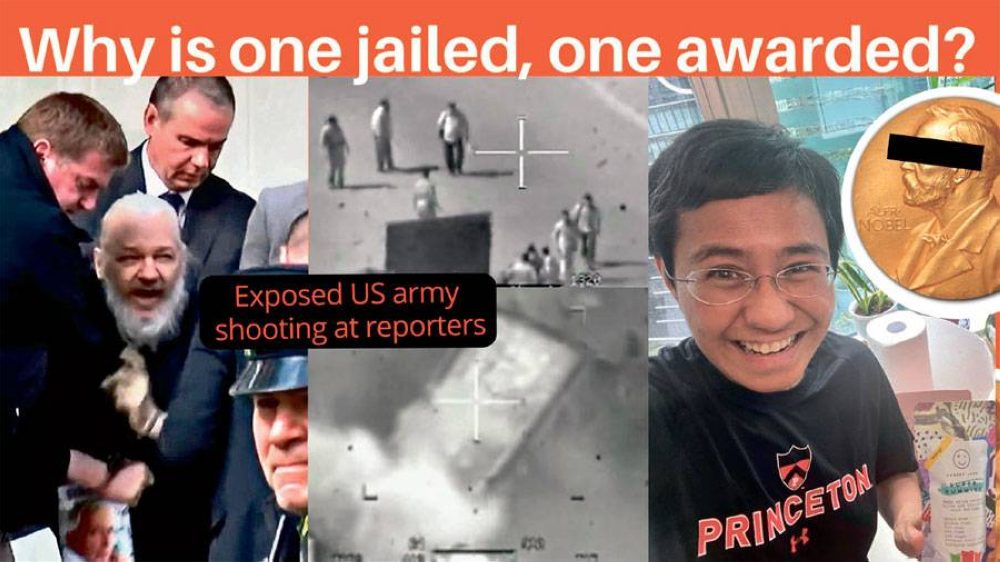 THERE is a difference between being good and being the best, and the Nobel Prize has been arguably the most prestigious award in the world. Meant to be for “those who, during the preceding year, have conferred the greatest benefit to humankind,” according to Alfred Nobel’s will, it has been tarnishing its reputation in the Peace Prize category to the extent that it is increasingly looked down on by much of the world.

Sometimes, it even selects the polar opposite of the stated ideals, including warmongers like Barack Obama, who approved the Libya and Syria bombings on false premises and protected the terrorists and their supporters, and many others. The award is routinely, periodically used by the US, the UK and the West to divert attention from their own warmongering with which to moralize and to create willing proxy mouthpieces to attack nonaligned nations or leaders.

Maria Ressa does deserve recognition. Whether we agree with her politics or not, she has shown courage, risked legal cases and financial pressures; but she also admittedly receives millions of dollars of foreign money from the US-CIA funded National Endowment for Democracy or NED, Omidyar Network and the Soros group, known for supporting groups subverting governments around the world. She lives quite freely, in well-appointed environments, and travels around the world in speaking engagements for foreign governments, which she and Rappler assiduously avoid critiquing even where thousands die.

The Duterte and Russian governments did congratulate the opposition Nobel awardees, though they can be forgiven if they did not, as many local opposition organizations made petty issues of the delayed congratulations to Ressa. Did the past administration or foreign governments congratulate the people given recognition for exposing Mamasapano details, tortures, practice killings of Afghan prisoners, or murders of children in Canada or of indigenous peoples of Australia?

Julian Assange was hounded by superpowers around the world, isolated in an embassy for 10 years, where he was illegally video-ed by US-contracted European agents, then dragged out like a dog, deported and until now, kept in prison in isolation — for exposing regular drone killings, tortures and other atrocities of the US. The CIA seriously considered assassinating him as revealed recently by several publications.

The US tracked and tried to arrest Edward Snowden around the world — for exposing the mass surveillance of populations around the world, who narrowly escaped capture and until now is exiled.

Assange and Snowden suffered a far higher price, against far more aggressive governments of superpowers, created much greater impact against tyranny, wars, and freedom of information, for humanity and not just one country.Julian Assange being dragged out by London authorities, video shots of the US army chopper shooting and killing civilians including journalists, and Maria Ressa. COLLAGE BY IDSI

On what basis can the Nobel board consider Maria Ressa or Dmitri Muratov more deserving of recognition, courageous as they are for criticizing their governments? What about different whistleblowers of US military atrocities who were charged or put in jail for years? What about leaders or lesser luminaries who have actually avoided, prevented or reduced wars?

There is a clear conclusion to draw: there can be no heroes recognized when their actions are against the US or western government.

Award-winning American journalist Ted McDonnell, who has worked in the Philippines for over five years, calls out Ressa’s “bulls**t” and says the Philippines is safer than many places in the United States when Ressa told CBS News 60 Minutes in 2019 that the Philippines was “worse than any warzone she’s been in,” not that she has been in a real, active, war zone, except in videos.

None of the western media fact-checked Ressa. To see for themselves record infrastructure building; and before the pandemic, unprecedented office and residential buildings under construction, record jobs, free college and basic health care under Duterte. Sure, there is corruption, poor management of Covid and controversial policies, but these hound almost every government in the Philippines and elsewhere.

The Nobel Peace Prize currently rides on the recognized prestige of the rest of the Nobel Prizes for sciences — to be used as a political weapon for creating conflict, not peace. It ignores far larger issues, and even clear contrary facts on many occasions, to perpetuate narratives desired by the US and the West. This is not to say the prize does not also often award deserving heroes and will continue to evolve… the world is not perfect. We have to recognize this fact about the world and learn critical thinking.

Philippine media is perhaps the most free in the world. Rappler and other writers routinely selectively ridicule the President or people in power, use unsubstantiated statistics and easily verifiable lies to attack, so that US-favored foreign media and institutions can use them.

Examples are the death tolls quoted vs Duterte; the fake boat pictures dispensing supposed human waste alleged by an Albert del Rosario Institute speaker, the CEO of US “think tank” Simularity, against China, only to be proven to be an old picture of an Australian dredger; and a proven fake Jabidah massacre that still is being referred to by Rappler, whose officers accept foreign appointments and financing and enjoy life normally in this “war zone,” albeit with apprehensions.

Rappler projects itself as a news organization when it is much more often an editorializing tabloid, conveying speculation rather than scanned research. Not that it’s the only one, to be fair. A Reuters-Oxford survey shows it is among the least trusted news organizations in the Philippines. But then again, our average populace prefer entertainment and sordid affairs to useful facts or skills as digital data shows.

Ressa is wonderfully articulate. The organizations and schools inviting her to speak are careful to select credentialled, but nonexperts on the topic of debate, avoiding available competent counter presentors.

Rappler quotes speculative death tolls without publicizing the finer analysis and counterpoints. It publicizes assertions by non-knowledgeable politicians and justices on supposed weak economic or social performance of the Duterte government, when the data on social services, education and unprecedented actual built infrastructure are easily seen. It doesn’t compare the multiples higher FDI than the previous government or provide context that many of the death toll of journalists are due more to local politics unrelated to Duterte and that the toll has gone down substantially vs the previous administration. It focuses attacks on China, downplaying the very extensive development; pandemic, calamity and military assistance; employment generated; or inflows of billions of dollars in tourism and other incomes brought in. But it doesn’t bring up the US and the EU blocking of military assistance during the ISIS Marawi rebellion, or the refusal to assist in vaccines for crucial months by the US and the west. Ressa doesn’t report BBC’s admission of faked Syrian gas attack videos.

It is alright to critique a government, but going to other countries to badmouth the Philippines as a war zone? Really? Eight million tourists a year, luxury apartments going up, the classiest Mandarin Hotel in Asia. Before the pandemic, having the lowest unemployment in decades? But then again, a US citizen, like her, is required to swear, “I… abjure all allegiance… to any foreign sovereignty…”

Nevertheless, we have no doubt she has affection for the country, that her protestations do create some balancing factors.

Congratulations, and we do hope her horizons can be widened, and she can, beyond critiques, actually work with diverse groups and imperfect conditions, for our country and the larger world.

Jan Albert Suing has been conducting policy research for both the public and private sectors, with some of his works published in “Population Ageing in the PH: Issues and Challenges” and “Towards an ASEAN Parliament: Challenges and Prospects.” He taught at Far Eastern University and received his master’s degree from the UP Diliman.