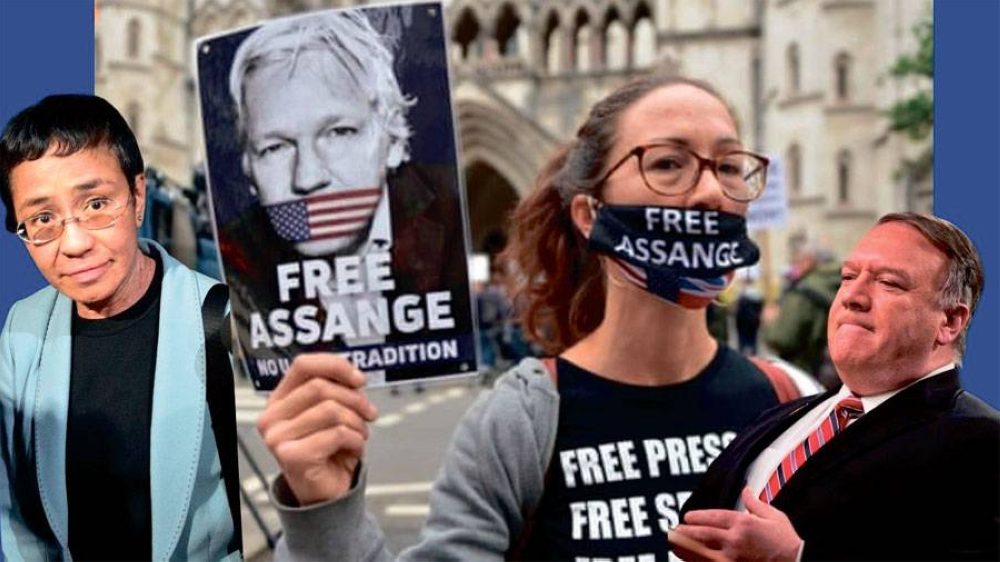 A CIA plot to kidnap and assassinate Julian Assange, recently reported by Yahoo! News, was discussed by dozens of high-level US officials, including then US Secretary of State Mike Pompeo and president Trump.

Whistleblower-journalist Assange is currently under trial for extradition to the US where he faces up to 175 years in prison after 10 years of arbitrary detention and after he has been put in isolation for over 18 months in Belmarsh, a high-security prison in London for terrorists. Rappler, ABS-CBN, Inquirer and Philippine Star have not reported on the bullying of Assange or spoken up for his press freedom.

Legal action vs the truth

The US Espionage Act, which punishes by decades-long imprisonment and death, including by assassination, etc., is being illegally used against Assange, who is an Australian citizen and not even in the US. Assange of Wikileaks is being persecuted for publishing troves of Afghan and Iraq war logs, including tortures and gratuitous killings by the US, a US army helicopter firing and killing noncombatants, including journalists, exposing DNC emails that revealed cheatings, Vault 7: CIA hacking tools, described as the largest data loss in its history.

A Spanish security firm was booked by the US to spy on all of Assange’s conversations even with his lawyers, violated all rights and legality while in Ecuador embassy, even when he was given citizenship in 2018 (the UK refused to give safe passage to return to Ecuador), but revoked it in 2021 under US instigation, trapped until British police illegally entered sovereign territory and seized him from the Ecuador embassy in London.

Why are the US, the UK and others against a much milder security law in Hong Kong (and in the Philippines) that was modeled by the special administrative region after the security law of Western nations, to protect itself, against destabilizers and anarchists being foreign funded and trained, given public platforms, supported by US legislature and executive. These were violent protesters encouraged and organized to fly foreign US and UK flags in Hong Kong. House Speaker Nancy Pelosi called the demonstrations in Hong Kong, which included ‘protesters’ burning of public buildings and throwing stones at bystanders, “a beautiful sight to behold,” but condemned the American rioters who stormed the Capitol.

Is it more fitting for the Nobel Peace Prize to award Ressa for press freedom who is still enjoying the good life in the Philippines, while Assange, Edward Snowden and Chelsea Manning who exposed the much larger truths, involving millions of documented deaths, at far more damage and risks to their lives?

American Brian Kern, an impostor for years presenting himself as a locally born Hong Kong Chinese person, turned out to be a white guy from the US who worked for Amnesty International, claiming to be working as part of the Hong Kong “Free Press.” “Kong Tsung-gan” with a Chinese picture, attacking the government through Hong Kong “Free Press” publications, Twitter and blogs, was widely quoted in the Western mainstream media. Even after the expose and Kern leaving Hong Kong, the pseudonym Kong Tsung-gan continues to operate and has even called for more Western sanctions against Hong Kong, similar to calls by some “anti-China experts” in the Philippines. Would this be tolerated at all if in the US, the UK or Australia, or some Russian or Chinese were to do the same? This fraud was a calculated intent to deceive and to sow discord.

CNN, The New York Times, The Washington Post, the Los Angeles Times, Agence France-Presse, Guardian and more, widely presented Kong Tsung-gan as an authentic Hong Kong activist. But none of them reported on extensive fraud of the exposed fake identity, which was fully verified. It was a freelance American journalist Max Blumenthal of Grayzone who reported that Kong was in fact Brian Kern who worked for Amnesty International (AI also confirmed that Kern worked for its human rights education team in London in 2007). HK “Free Press” editor Tom Grundy had threatened legal action against Hong-Kong’s Standard after it published a column by Nury Vittachi that said Kong was American.

We should question not just issues of privacy but also deception and consistency of standards of law. Kern should instead protect Americans who are killed and not foreign-funded violence in Hong Kong. Would the US, the UK and Australia allow a foreigner to regularly incite antigovernment rallies and under false ID, as Kern was doing since 2014? Funding propaganda campaign, aka “influence operation,” continues to escalate with the $300-million annual budget passed by a bi-partisan US Congress called the Strategic Competition Act of 2021 — “strategy” means “against China and Russia” that do not threaten or do the same to the US.

During the height of the Hong Kong protests, Dr. Michael Pillsbury of Hudson Institute admitted that the NED funded “millions of dollars of programs to help democracy in Hong Kong” to groups that led the protests in Hong Kong. Former head of the NED Alan Weinstein admitted that “a lot of what we do today was done covertly 25 years ago by the CIA. US-CIA linked NED and its affiliates gave around P7 million to VERA Files in 2016 to 2017 and another P7.5 million to Rappler, the two fact-checkers for Facebook.

In the Philippines, Inquirer, Rappler, even Liberal Party senator Francis “Kiko” Pangilinan glorified the Hong Kong rioters as freedom fighters, yet did not report on the rioters receiving foreign funding and foreign training.

Is the Philippines next? Dollar trail to Rappler?

Recently, Change.org removed an online petition calling for the Nobel Prize to recall the award of Maria Ressa that had already received over 126,000 signatures and was still growing viral. Change.org received $15 million from Omidyar in 2013.

Rappler also received P180 million from US-firms North Base Media (linked to George Soros, who has banned in several countries after his organization was also linked to antigovernment activities). Omidyar, also referred to by some as “billionaire surveillance capitalist,” has extensive links to D.C. surveillance companies and USAid. It was directly linked to Syria’s White Helmet to advance the agenda of Western foreign policy in Syria, which BBC admitted faking videos lying about the Syrian government using chemical warfare in incidents on its people. Fourteen managers received a windfall in 2018 when Omidyar converted its $1.5-million investment into a donation when the Philippine government filed the case against Rappler for violation of the Constitutional prohibition of foreign ownership in the media.

Who really controls Philippines media? Facebook, Instagram, other digital giants control who gets shut down, banned, suppressed, favored. Some countries including Singapore, France, India, China, also the US are beginning to regulate the social media giants. The Philippines needs to study closely what position it should take.