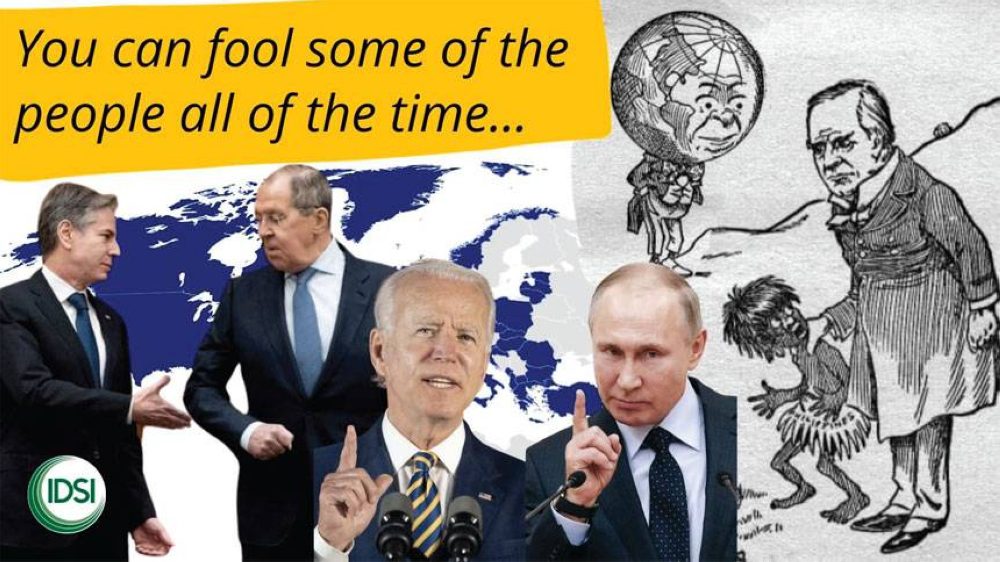 THE US and Russia face off in the Ukraine in a crisis that may start a great war. It will be the first one in decades that is directly between the superpowers although the Ukrainian pawn will suffer the greatest loss of life should it push through. Small countries like the Philippines would do well to review lessons from yesteryears and the circumstances today.

The mask maintained by the US has come off. Pretending it was Ukraine or NATO that was confronting Russia was no longer credible as the US, through State Secretary Antony Blinken and President Joe Biden, talked directly with Russia’s Foreign Minister, Sergey Lavrov, and President Vladimir Putin while the Ukraine, the theater of conflict, was NOT EVEN INVITED to the discussion.

While NATO is also in the discussions, the European Union has to remind the US that its interests should not be the only consideration, that the threatened sanctions on all trade and oil, gas deliveries from Russia would severely damage the EU, who don’t fight with Russia, especially if executed this cold winter where heating is needed.

The western media uniformly reports the cause of the conflict is Russian aggression to retake east Europe, that it has massed troops and military equipment on the border of Ukraine. But western media fails to mention as well the Ukrainian massing of military to take over the Donbas region, which it had agreed to give autonomy to in the Minsk agreements. Russia claims it wants to protect the Russian population if attacked by Kiev, that could lead to genocide; the west allowed genocidal collapses earlier in the Slavic and other Mideastern countries under their control.

The western media charging that Russia had invaded Crimea and is likely encouraging and assisting separatist groups in the Donbas may arguably have basis, but it should be fair to point out that the Ukraine coup was supported by the US, removing an elected president to install the US’ own, and Crimea was being attacked by Kiev, where in a referendum 97 percent among the 83 percent of Crimean people voted to be part of Russia, fearful of Ukrainian rule marginalizing them. Never mentioned for perspective is that the US is actively financing, even passing legislation and sending military forces to encourage dozens of separatist groups around the world, while allowing suppressing, invading, taking over settlements of separatists and putting minorities in ghettos in allies’ countries.

From the Russian, and any normal nation’s view, the insistence on a legally binding agreement with the US that it will not increase NATO presence seems reasonable, given the liberation of East Europe was agreed to by the USSR among other things based on the US’ James Baker’s promise that NATO “would not move an inch east.” But since then, the US has brought NATO to Poland, Hungary, and the Czech Republic, Bulgaria, Estonia, Latvia, Lithuania, Romania, Slovakia and Slovenia. Now Ukraine is at the very border of Russia.

Despite the many records showing such a promise was given, the US demands that it be shown in writing. The US has time and again shown they do not value their promises; diplomats should always take this into account.

To further bring Ukraine into NATO would be allowing missiles right at the doorstep of Russia and closing off Russian maritime access to Europe. This is an existential destruction of Russian power, allowing it to be choked by sanctions, a frequent practice of the US. This limiting of or even strangulation of physical accesses to trade and movement, now includes access to technologies, finance, and takeovers of national bank accounts,

Financial strangulation by closing the Swift US dollar currency clearing system is also being threatened by the US, which is calamitous for any nation but survivable for a few diversified powers. This threat is a warning to the rest of the world.

The US had threatened to go to possible nuclear war with Soviet Russia in 1962 when Russia was putting missiles in Cuba, at the US’ doorstep. Rarely brought up in history lectures is that this was in response to the US’ secret Bay of Pigs invasion of Cuba and putting nuclear missiles on the Turkey border aimed at Moscow. Should the US be the only country allowed to protect itself by disallowing encirclement by offensive weapons?

It is a generally accepted politico-military traditional compromise in such cases to allow a buffer region. It was agreed between various countries in Europe, outer Mongolia became the buffer between Russia and China, USSR withheld from installing missiles in Cuba, and other instances.

The Russian demand currently to return to the original promise would be impossible to imagine though.

The US posits that Ukraine has the right to allow the installation of weapons from NATO in its own territory but disallows non-aligned countries from having the same rights to developing and installing weaponry even in their own territory.

US allies may develop nuclear weapons, assassinate, bomb even innocents without penalty. This was proven again last week in videos of innocent civilians killed by US drones in Kabul, with no parties prosecuted. For the non-aligned, arresting a few inciters to violence leads to international outcries of genocide even if they live in better circumstances than many US citizens.

This is directly aligned with the experience of the Philippines in the Scarborough Shoal standoff in 2012. The unnecessary confrontation arose because of bungled simple fisheries disputes that were non-events among half a dozen countries for decades, but were highlighted in the media, with macho declarations and military interventions entered — Philippine foreign affairs bungled, but very favorable for the US?

In discussions with China, then Foreign Secretary Albert del Rosario incomprehensibly abdicated his role in negotiating, or even being present at, or even in formulating the terms of a mutual withdrawal of boats in a standoff with China, which was already accomplished by Sen. Antonio Trillanes 4th to the last three boats. Yet del Rosario dropped this successful progress in favor of escalating the confrontation to an international non-court that calls itself a court, the Permanent Court of Arbitration, then still blames the failure on others and on China. Why did the US become the sole negotiator and why have Antonio Carpio, Jose Cuisia and their followers never answered these questions by facts in their narratives — “an inconvenient truth”?

These false promises and exclusions are repeatedly part of our experience, where the US and Spain negotiated the “liberation” of the Philippines to make brown brothers part of “white man’s burden.” Aguinaldo and the Filipinos were prevented from joining the meetings. Then the Philippine-American War was started by American shots that were blamed on the Filipinos, even though President Aguinaldo repeatedly asked to have discussions early on to clear “the misunderstanding.” Gorbachev might have learned from Philippine history.