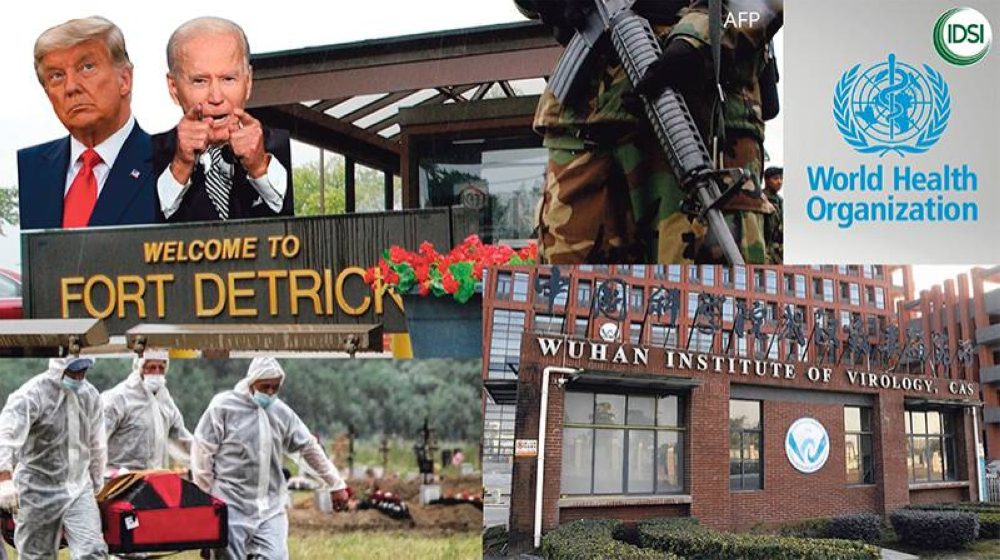 As another wave of infections hit the United States, together with the Afghanistan debacle, President Joe Biden and the European Union called for a reinvestigation of the Wuhan lab, placing “intelligence” officials rather than scientists at the head of the investigation.

Despite the White House pushing for indictment after three months of the investigation, the intelligence reported the findings inconclusive and made the report confidential – but not before announcing that a “partially screened” version would be made public.

The US under Trump and Biden aggressively pushed the World Health Organization to trace the alleged virus leak to the Wuhan lab. The US, however, bans the WHO from investigating any of some 200 US-owned biolabs worldwide.

In comparison, China allowed top global scientists to go to Wuhan as early as January 2020, where the WHO director general even met President Xi Jinping, and 25 of the best scientists from the US, Germany, Japan, South Korea and Singapore, among others, visited Guangdong, Wuhan and Sichuan, concluded that there was no evidence to link the virus to a Wuhan lab leak.

The US Chairman of Joint Chiefs of Staff Mark Milley as early as April 2020 also said there was “no weight of evidence” that the virus originated from a lab. Scientists around the world concurred by a great majority.

In April 2020, Politico revealed that a 57-page memo was being circulated to American politicians telling them they should not defend Trump’s handling of the pandemic and instead, pivot to blaming the Chinese government if Trump’s response is questioned.

Why is the mainstream media deafeningly silent about the continued US refusal to allow WHO inspection on any of her biolabs, even after 25 million signed an online petition to probe Fort Detrick? The US closed Fort Detrick in 2019 for breaches of safety protocols. Fort Detrick was among 200 labs around the world, funded by the US government for years to research, among other things, making animal viruses transmissible to humans.

Animal diseases like hoof and mouth were believed to have leaked in 2007 as well as possibly a 1977 flu strain that closely resembled one nonexistent for 20 years already. Vials have gone missing as well, among other “accidental leaks”; not counting the viruses and bacteria used to infect early North and South American Indians to decimate them and possibly appeared in the Korean and Vietnam wars.

The US also not only recruited and protected from war crimes prosecution but also supported the perpetrators of horrific human experimentation, the “731 unit” of Japan and the nuclear scientists of Germany of World War 2. The biowarfare labs of the US were built by these experts, which conducted live freezing, compression-decompression, mutilations and infections on thousands of live Chinese, Russians and others.

Flu researchers led by Ron Fouchier of the Erasmus Medical Center in Netherlands announced they would engineer a new H7N9 avian flu to give it new possibly deadlier capabilities. He is the scientist who two years ago adopted the H5N1 flu strain to allow it to pass from human to human, which it could not do in its natural form. These research centers were supported by the US National Institute of Allergy and Infectious Diseases and others outside of the US, which would put the health, security and legal risk outside of the United States, and any accidents or scandals can be blamed on foreign countries (Forbes 2013, Steven Salzberg Professor of Biomedical Engineering at Johns Hopkins University).

Fouchier companion Yoshihiro Kawaoka admitted the virus’ pandemic risk would rise exponentially if it gained the ability to spread easily among people. Which is what we are experiencing today.

These are just a few of the researchers used by the US supposedly to find antidotes for pandemics, but why is it then that the US had the worst Covid pandemic management despite the highest resources of both talent and financing? Flu expert Michael Osterholm is quoted by Salzberg, molecular biology professor of John Hopkins, that this research of Fouchier group had not contributed to better our ability to respond to any pandemic or creation of vaccine, as the covid experience shows in the US.

Former assistant State secretary for international security and nonproliferation Christopher Ford was attacked as traitorous by the mainstream Western establishment, including media CNN, Fox News and Vanity Fair for pushing for competent scientists’ vetting of the Trump administration’s assertions of the “lab-leak theory,” rather than by unqualified intel researchers.

There is much information that seems to indicate earlier possible coronavirus precursor incidents in Italy and other parts of Europe and the US. US CDC Director Robert Redfield himself admitted in a Congressional hearing in March 2020 that the US had misdiagnosed Covid deaths as influenza. The US also had record influenza deaths and vaping-related illnesses in 2019.

The mayor of Belleville, New Jersey, Michael Melham, reported he contracted the novel coronavirus symptoms in November 2019, even before they were experienced in China.

The disastrous US mismanagement of Covid is a reality of the most advanced healthcare system and bio-research in the world having the highest infections and deaths. The US has over 630,000 deaths, India (an ally of the US that was also betrayed by the Americans for promised vaccines assistance that never came) has over 430,000 deaths and where the Indian virus “Delta-variant” originated, while China had 4,600. Even assuming 10x data inaccuracy, any visit to China and statistics of its products and verifiable travel logs clearly show far better management of the covid and continued high social and economic activity.

This US mismanagement of Covid – despite warnings and forums by WHO to the world, and information from China and Europe starting January 2020 (detailed WHO timelines in WHO website), and by US intel reports themselves even from 2019 – is being addressed by blaming China. This poor pandemic response was due to Trump and anti-science US voters’ concerns with individual freedoms, escalating these to illogical levels, not believing in masks or distancing, and looking for scapegoats instead. India’s massive death toll was also partly largely due to US blocking vaccination or raw materials and Indian government decisions.

America only wants the world to focus on China – another ploy to distract its domestic audience from its own incompetence on Covid, to distract the world audience from the abuses and failures of the US, rather than work on solutions together and assist others. China assisted 150 countries, while the US blocked vaccines and raw materials from the world during critical months.

The US has a history of not learning from and dealing with its failures by blaming or invading others.

China has already opened its facilities for examinations. What is keeping the US from following suit?

Jan Albert Suing has been conducting policy research for both the public and private sectors, with some of his works published in “Population Ageing in the PH: Issues and Challenges”; and “Towards an Asean Parliament: Challenges and Prospects.” He taught at Far Eastern University and received his master’s degree in International Studies from UP Diliman.