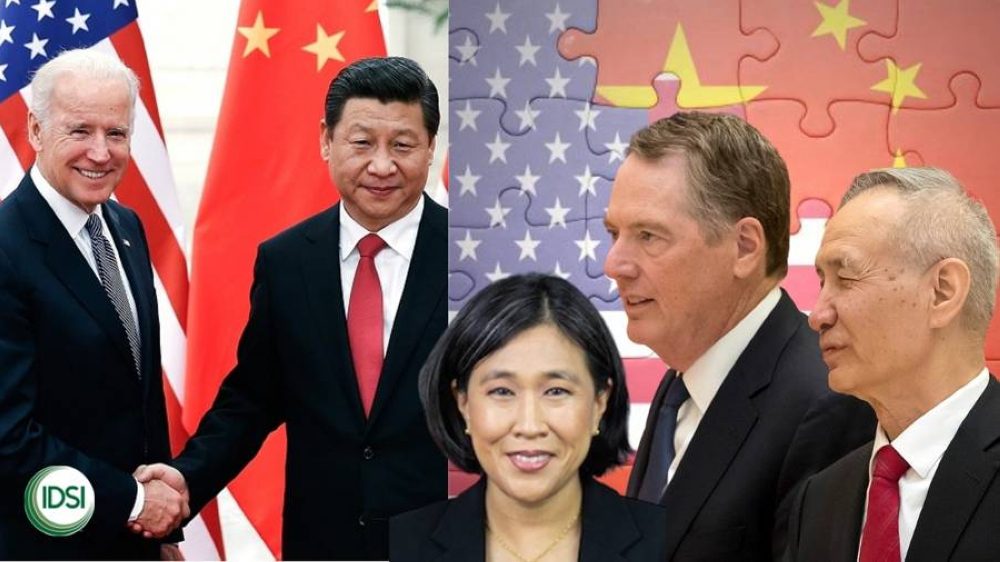 On October 4, US Trade representative Katherine Tai delivered her much-awaited first public speech on the Biden administration’s China trade policy. It is generally recognized that trade relationships provide the most common interest that binds the two ideologically different giants together. The trade relationship is often the precursor of the overall Sino-US relationship, and watching this most important bilateral relationship often takes its clue from the improving trade link.

The deterioration of Sino-US overall relations started in July 2018 with the imposition of a 25-percent tariff by the previous Trump administration on $34 billion of Chinese merchandise export. Subsequent tariff action placed over $300 billion Chinese export to the United States under the additional tariff of up to 25 percent.

China and the US signed the “Phase One Deal” on Jan. 15, 2020 to reduce trade tension. Aside from intellectual property and technology transfer, the most significant part of the deal is to commit China to buy more from the US. In the deal, China agrees to buy an additional $200 billion of American goods and services in 2020 and 2021 over its baseline purchases in 2017. The 2017 purchase was about $130 billion of US merchandise exports and $50 billion of US service exports, implying a baseline of $360 billion over two years. The agreement commits China to ramp up its purchases to $560 billion in 2020 and 2021.

One should note that in 2017, US merchandise goods to China was the highest on record. However, the figure dropped to $120 billion in 2018 and $107 billion in 2019. Thus, there is little doubt that the Phase One trade target is tough to reach. It is more a concession providing the President Donald Trump with a numerical figure to boast of in an election year than an objective evaluation of an easily achievable target.

The pandemic disrupted world trade, particularly service trade such as tourism, in which the US enjoys an edge. Based on the computation of Washington think tank Peterson Institute for International Economics (PIIE), China is about 30 percent behind its 2021 goods purchase targets as of August. PIIE record showed that the 2020 purchase target is off by around 40 percent.

The China manufacturing sector and economy, however, have shown resilience amid the pandemic and tariff wall.

The 25-percent import tariff did hurt the Chinese export competitiveness in the US market. As a result, the merchandise exports to the United States dropped from $539.50 billion in 2018 to $452.24 billion in 2019 and $435.4 billion in 2020. However, the Chinese manufacturing sector demonstrated surprising resilience in improving cost competitiveness and retooling output to meet sudden market shifts under the dual challenge of the Covid-19 pandemic and the US tariff wall.

In 2020, the US granted a tariff exemption to dozens of items such as disposable face masks, respirators and Bluetooth tracking devices. The concession was extended at the height of Trump anti-Chinese rhetoric, and it is apparently out of necessity in the pandemic.

The Chinese merchandise export to the US in the first eight months of 2021 is running 20-percent ahead of 2020 and is expected to be $500 billion for the year. Thus, the additional 25-percent tariff does not dent the competitiveness of many Chinese exports.

China’s share of global exports of goods reached 14.7 percent in 2020 based on the United Nations Conference on Trade and Development record, and it is the highest level of any country since the Unctad record in 1978. The country is also the only major country registering positive GDP growth of 2.3 percent in 2020. The economic and supply chain resiliency of China is remarkable.

Tai announced four key “initial” steps of the Biden administration’s trade policy on China in her speech, “New Approach to the US -China Trade Relationship”:

1. The US will discuss with China its performance on commitments under the Phase One Deal, including on agriculture

2. The US will start a new tariff exclusions process on bilateral tariffs imposed on Chinese goods

3. The US is concerned with China’s SOEs and non-market trade practices, which are not covered in the Phase One Deal

4. The US will consult and coordinate with allies and partners on China trade policies.

In her speech and subsequent Q&A, Tai deemphasized the numerical target in the Phase one agreement. Instead, she said the keys to keeping US global competitiveness and creating shared prosperity at home are revitalizing the manufacturing base, increasing domestic investment, strengthening competitiveness by infrastructure upgrade and education improvement, and intensifying R&D.

By restarting the new tariff exclusions process, the Biden administration admitted that using tariff walls hurt the American industries and consumers as much as Chinese exporters. Using terms such as “co-dependency,” “durable co-existence” and “discussion” instead of “negotiation,” Tai tried to strike a different tone in the forthcoming discussion with Liu He, the vice premier in charge of trade negotiation.

Ambassador Tai’s conciliatory statement, “Our objective is not to inflame trade tensions with China,” is a sharp departure from the testy opening remark of Secretary Antony Blinken at Alaska in March when he met the most senior Chinese diplomat Yang Jiechi. Then, Blinken started by accusing China of subverting the global order, which Yang promptly rebutted.

What the world needs is a US-China recoupling.

The US and China are the two largest economies globally, and they account for over 40 percent of global GDP together. They are the only countries with the size, breadth and depth to drive global economic recovery. The US-China trade and economic relationship is one of profound consequences that does not just affect two countries, it impacts the entire world.

The American dominance on global finance and the preeminent Chinese role in the global merchandise supply chain make their cooperation indispensable to a smooth post-pandemic economic recovery. The forthcoming Biden-Xi virtual summit before the end of the year will hopefully restart the long process of working out durable co-existence. No one expects the complicated US-China relationship to turn around easily, but slowly removing trade friction as a pressure point for US-China relations in the near term, hopefully, will facilitate a more conducive atmosphere for other tough issues.