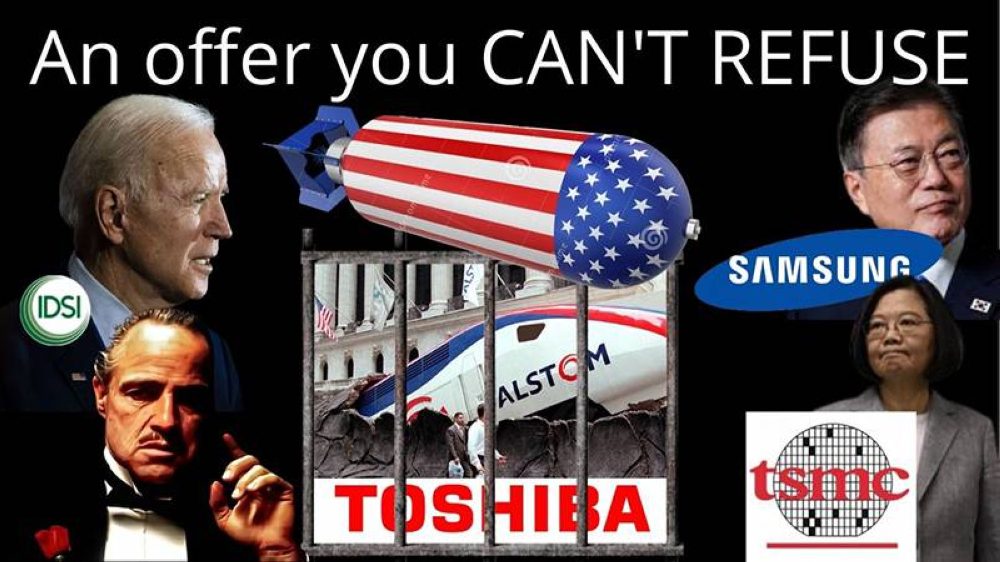 THE US is now forcing tech giants to give their technology and market secrets to the US government, demanding strategic manufacturing world-leaders Samsung and TSMC to give details of their clients, clients’ orders, income and expenditures, patent information and production by November 8 or face consequences, including arrest of their officers.

“I’m gonna make him an offer he can’t refuse,” is an oft-quoted line of the world’s most famous fictional mafia boss and godfather, Don Corleone.

In a similar clear threat, US Commerce Secretary Gina Raimondo said, “I don’t want to have to do anything compulsory but if they don’t comply, then they’ll leave me no choice,” implying the use of the Defense Production Act, which allows the US government to impose allocations and pricing during national emergencies or threats. But this is a US law being applied extraterritorially — to the world, illegally.

This news is hardly reported in mainstream western outlets but came out in South Korean and Taiwan newspapers.

This latest demand is supposedly for the US to understand supply chain issues, however, the detail demanded is well beyond inventory levels alone, and reveal competitive tech and market information that is proprietary and affects competitiveness. They are also legally confidential, plus they affect international relations and viability of enterprises.

This coercive tactic has been used by the US repeatedly in the past to destroy or take over competitors and to remain in a technological leading position, a form of “innovation and creativity,” when the US is falling behind in technology race. The weaponization of the law and paradoxically, its willful violation, is one of the key reasons the US is able to stay ahead of others. It’s not all innovation and creativity that keeps the US the world’s hegemon and richest country — so far.

Suspicions and anger of chip players around the world have been raised as the industry is highly globalized and interdependent, especially since the US chip industry and the US government have recently been working to strengthen their partnership, planning subsidies and cooperations. Intel CEO Pat Gelsinger and Semiconductors in America Coalition (SIAC) recently met with Biden government officials to push for subsidies, regulatory advantages and chip investment plan.

In the 1980s, as Japan rose to challenge US leadership in business and technology, the US forced Japan’s semiconductor industry to unconditionally share technologies with American companies as well as demanded a massive revaluation of Japan’s (and other countries’) currencies.

US cruelly crushed and humiliated Japan, like a second nuclear bomb, by demanding nationwide published apologies in the US, having Japan’s own police arrest the presidents of Toshiba subsidiaries, having Toshiba pay penalty equivalent to $16 billion today. The US imposed 100-percent tariff on Toshiba products sold to the US, banned exports to the United States for five years and banned exports to 14 countries for a year, among other sovereignty-surrender punishments.

Japan and Toshiba never recovered from these impositions. In the same way, the Europeans and the US in history crushed and had to humiliate the American Indian nations, Hawaii, Mexico, China a hundred years ago, even the Soviet Union through Gorbachev. The same was done in the Philippine American war, except most of us Filipinos got conditioned to believe in and love our masters. Vietnam refused to bow, paid the price of millions dead, and today has reinvented its relationship positively. China and Russia now will deal on productive manners with the US but refuse to “bend the knee” — today at least.

The US claims to fine and punish for bribery but has not charged or punished its own corporations known for cornering resources, produce and licenses, and purchasing loyalties, creating revolutions, dealing in drugs, making fake claims, conducting slave operations in other countries, among others, for example Westinghouse, United Fruit, the oil companies, etc.

After kidnapping and imprisoning Alstom’s executive when his plane landed in JFK airport for “authorizing bribes to Indonesian officials” to secure a contract, the US government also forced Alstom, then the global leader in power and transportation fields and France’s high-tech champion, to sell its crown jewel to GE (General Electric).

These are reported in The American Trap: My Battle to Expose America’s Secret Economic War against the Rest of the World, written by Frederic Pierucci, the executive who was kidnapped.

The same coercive takeover fate awaited another stellar French tech enterprise, Gemplus. Founded in 1988, it used to be the world’s leading provider of smart card-based solutions. CEO Marc Lassus was eventually forced to resign and “Alex Mandel, an American who served on the board of directors of the CIA venture capital agency IN-Q-TEL, became Gemplus CEO,” revealed in the book The Chip Trap.

Kidnapping and weaponization of “law” is regularly an instrument of state policy by the “rules-based order,” except the US makes and changes the rules arbitrarily anytime.

Recently, without violation of Canadian law which is required for extradition to the US, Canada on US instigation kidnapped Meng Wanzhou, daughter of leading tech firm Huawei’s founder. Verified email and other evidence of HSBC (a UK-based company) knowledge of the deal with Iran were repeatedly denied admittance as evidence in court. The US banned allied countries from purchasing superior and more economic Huawei equipment, banned sale to Huawei of chips, doing everything it could to damage the company.

Huawei and Meng survived, with China standing up to US bullying. But not without taking severe damage, losing the smart phone market that Huawei was about to become number 1 in the world in, losing tens of billions of US dollars in sales. Founder Ren Zhengfei considers these circumstances as holding lessons that should force Huawei to develop itself better. He told a BBC interviewer that while sad, he should thank Trump for making his daughter stronger.

Technology is seen as central and strategic point for primacy and competition by both China and the US, except China does it more by internal development and the market’s mutually accepted deals. The US after using tariffs and trade, false media accusations of genocide, has come to regularly employ extraterritorial impositions of not only law but simple policies for US benefit as sufficient to require other nations to sacrifice their own sovereignty, economic and people’s interests.

By entering the game of financial currency manipulation, the US is able to simply create digitally, without even printing, more currency at a switch than China or the world is able to produce in decades, even using this money to wage war against the very users and backers of the dollar.

The constant escalations by the US may lead to physical war, and these will be conducted outside of the US mainland because of geographies, robotics, remote technologies. Proxy locations have been in Iraq, Libya, Syria, Yemen, Venezuela.

The pivot to Asia is actually centered in Southeast Asia, and the Philippines is right in the center. Our Department of Foreign Affairs, Department of National Defense and presidential aspirants should study the situation with the diverse dimensions it should rightfully be considered under, in an integrated way, possibly for the very survival of our everyday Filipino.

Where should the Philippines position in all this? Join our Webinar on Thursday, Oct. 28, 2021 with geopolitical and development experts. RSVP for access: bit.ly/peaceph2021.

US-China recoupling good for the world

Old vs new: US & China reinventing systems amid upheavals