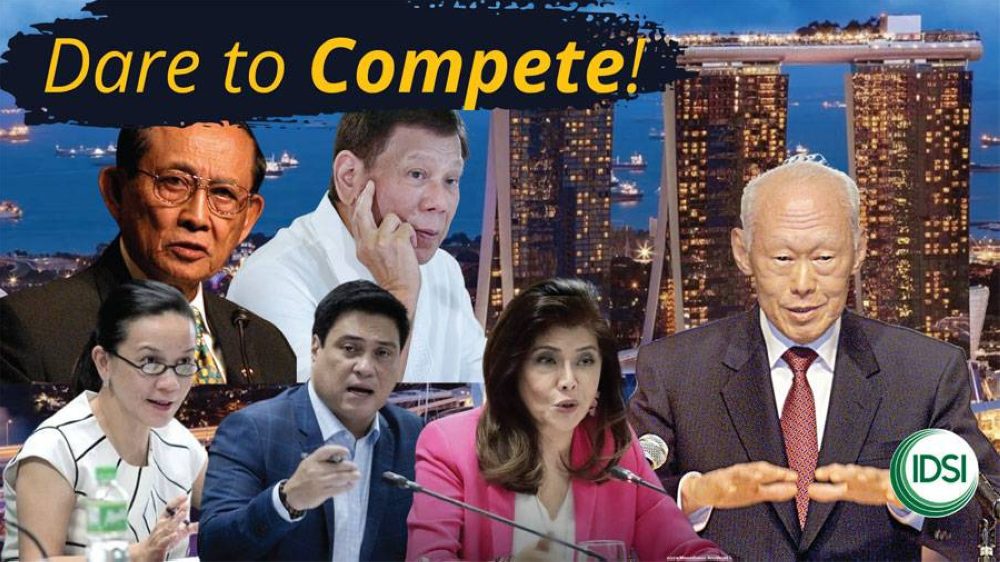 (Exclusive bonus! Rare video of Lee Kuan Yew’s visit to the Philippines in 1992…at end of the article!)

LEE Kuan Yew in the 1990s predicted we would fall behind Malaysia and Thailand and encouraged us to open up to competition to join the ranks of newly industrializing nations. Today, we are half of Thailand and a third of Malaysian per capita gross domestic product (GDP), having recently also fallen behind Indonesia and Vietnam.

For foreign investment restrictiveness, we are currently ranked as the third most restrictive of 83 countries, according to an OECD study, cited by foreign and local business chambers and Trade Secretary Ramon Lopez. Senate Bill (SB) 2094 seeks to amend the Public Service Act, opening up added utility sectors to foreign investments. What are recent experiences with foreign investments in major public services?

Worst airport in the world? Since Megawide joined forces with India’s GMR Infrastructure, our airports got built on time with international awards, creating much increased tourists in Cebu and Clark opening soon. Since the National Grid Corp. of the Philippines in partnership with China’s state-owned enterprise (SOE) took over, the brownouts became a thing of the past. Malaysian capital helped build our early elevated highway successes. Since we took over the maintenance of our rails from the Japanese, we had several major breakdowns. We lost the planned petrochemical $500 million plant in Bataan about 30 years ago, and Hong Kong’s Li Kashing, running the second largest port volume in the world at the time, won the Subic port twice but lost twice after winning. So, we lost the Hong Kong cargo volume he said he would bring into the Philippines.

It is not foreign direct investment (FDI) itself that we are after, but the positive effects that it can contribute to a more progressive Philippines. Full utilization for success requires key factors, including culture, competence in math and reading comprehension, and working smart. We need to design and implement not just government laws, but also international finance and technology and markets in creating progress. Improved digital infrastructure should not be used for entertainment and gaming, but primarily, for studies.We need faster logistics of seaports and airports as much for manufacturing and being a processing hub; not just for consumption. We need lower energy costs and more competent practitioners of logistics. Without this, we cannot protect against any foreign preponderance of the markets.

We have to realize that many foreign investments and influences are already here. Our telcos are capitalized by Indonesians and by Singapore government SOE; the National Grid Corp. of the Philippines by the Chinese. Majority of our media content is controlled now from the US (i.e., Netflix, YouTube, Facebook and gaming) with the predominant use of our people’s time over 9 hours a day on average. But these foreign “partnerships” also helped us move to the middle income GDP.

It is the Filipino people who benefit when there is competition in the public sector. SB 2094 aims to modernize the antiquated economic provisions of our Constitution pursuant to the evolving times. The 1987 Constitution preceded our joining the World Trade Organization (WTO), which also requires member states to liberalize trade, investments and services. The Supreme Court in Angara vs Tañada upheld the Constitutionality of the WTO despite the Filipino-first policy in the Constitution, which essentially means the Court ruled that the liberalization of trade, investments and service contributes to our greater national interest. Discriminatory policies like singling out foreign state-owned enterprises will only be counterproductive to the spirit of attracting and capitalizing on foreign investment, Roque added.

In order to achieve ultimate Philippine development, we need to work with all partners, local and foreign, who can help us with technologies and resources, market accesses that we don’t have in the first place. Had we had these technologies and the capital, then there would be no need for foreign cooperation,” reminded Roque, who is also a Senate candidate.

If we unite and improve ease of doing business and attract more foreign investments, our economic recovery shall continue and be resilient, opined Dr. Henry Lim Bon Liong, President of the Federation of Filipino Chinese Chambers of Commerce and Industry (FFCCCII), forecasting that the Philippines can achieve 6.5 percent or higher economic growth in 2022 unless another variant appears.

At present, our other Southeast Asian neighbors have a bigger share of FDIs, and this stiff competition teaches us not to be complacent. A good businessman thrives on competition, reminded the Harvard-trained industrialist Dr. Lim Bon Liong.

The amendments to the Public Services Act, part of President Duterte’s legislative priorities, will only make our foreign investment policies at par with our neighbors. The formulation of the amendment today has shown our legislators Franklin Drilon, Mary Grace Poe, Francis Pangilinan, Miguel Zubiri, Imee Marcos and Francis Tolentino have taken flexibility in the future into consideration.

What we should assess is the overall effect over time of our legislation and correct implementations. We need a better talent pool search and recruitment process, their empowered entry into government, and the right incentives. Then, beyond relying on the government or just foreign investments, we the people need to get into work. New capital and technology inflows from abroad into critical infrastructure and building new markets will accelerate recovery and give our people a chance to prepare forward into the next, fourth stage of industrialization instead of languishing behind even our Asean neighbors.

The Public Service Act and foreign investment laws should be consistent and nondiscriminatory, and recognized as evolving over time and adjustable as technologies and cultures and definitions of security change. Telcos are not as important as broadband access now. Global media such as CNN, Reuters, Netflix, YouTube and Facebook have reduced the role of national tv and publications. Services have outstripped manufacturing in many countries, etc.

Together, we need more economics and to reduce politicking and focus on just working smart.

Lee Kuan Yew’s advice for the Philippines’ progress was 30 years ago. Will we do better this time? Watch the rare footage of Lee Kuan Yew on https://bit.ly/LKYph

Lee Kuan Yew in the 1990s predicted that the Philippines would fall behind Malaysia and Thailand, and encouraged us to open up to competition to join the ranks. Today we are half of Thailand and a third of Malaysian per capita GDP, having recently also fallen behind Indonesia and Vietnam (1992 PCCI Business Conference Manila)

Harvard trained industrialist, business and civic leader, FFCCCII President Henry Lim Bon Liong shares the secrets that made countries like China and Vietnam leapfrog from a poor country to one of the most dynamic economies today

George Siy is a Wharton-trained international trade practitioner and negotiator, business leader, and Chairman Emeritus of the Anvil Business Club. He has advised various Philippine government agencies and organizations in trade negotiations with Asean, Japan and the United States.