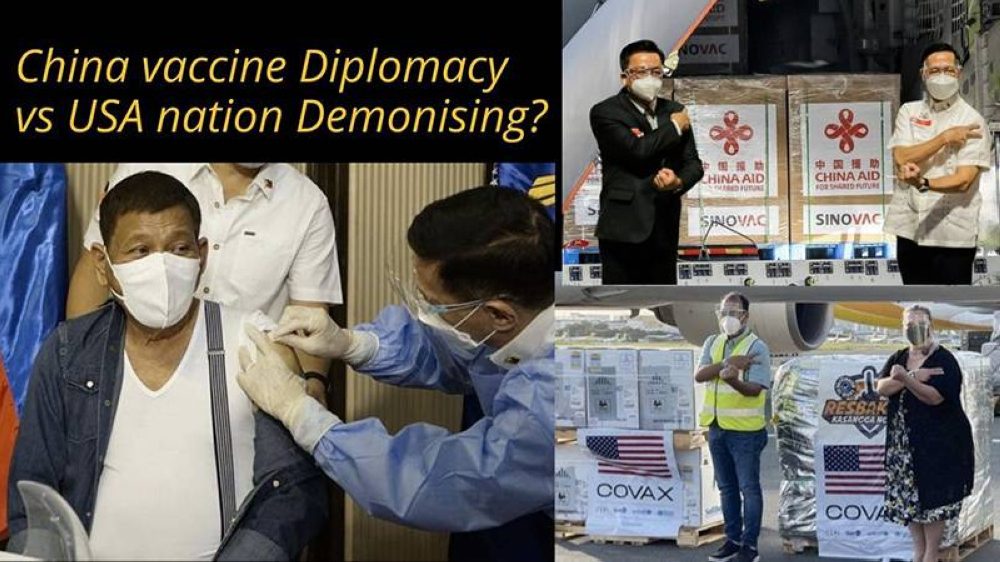 DELIVERED as promised, not just mere “pledges,” China’s donation of 2 million more vaccines arrived right before Christmas, contributing a total of 57 million (5 million donated) to the country’s national vaccination program. Vaccine czar Secretary Carlito Galvez Jr. reported over 23 percent of Filipinos were protected by Sinovac. Worldwide, China has delivered over 1.3 billion and donated 126 million doses of the vaccine. China’s vaccines have been more effective worldwide and also in the Philippines than how mainstream media has portrayed, which often downplayed many of the assistance and sensationalized the biased results and minority or isolated cases.

Western presentations on “vaccine diplomacy” fail to say that China was already delivering the vaccines as early as December 2020. On the contrary, Biden’s White House as late as March 2021 publicly said that THE US WILL NOT ALLOW DELIVERY of vaccines to neighbors Canada and Mexico (but after a public backlash, he later said the US will share available surplus).

Even US ally Serum Institute of India’s CEO Adar Poonawalla complained that US and Europe were blocking raw materials. And a few weeks later, India would see a record THOUSANDS OF DAILY DEATHS followed by the emergence of the Indian-variant (Delta). China was offering assistance to the Indian National Science Academy and sending vaccines abroad when China had only inoculated around 10 percent of their population at that time, whereas richer Western countries hoarded vaccines 4 to 5 times more than what their whole population needed.

These were hardly mentioned in the webinars on the ‘vaccine diplomacy’ organized by the Foreign Service Institute and Singapore’s Iseas-Yusof Ishak Institute and Konrad Adenauer Stiftung, that attempt to paint the narrative that Asean countries, including the Philippines, were somehow cajoled to prioritize the China vaccines over the US vaccines that limited the options of their citizens.

Then Secretary Harry Roque Jr. called out the “experts” who criticized Duterte for prioritizing China vaccines but negated the fact that the West were actually blocking and hoarding exports.

The Philippines’ first batch of vaccines was donated by China, 600,000 doses arrived on Feb. 28, 2021, a few days after Philippine Food and Drug Administration approval. The Philippine FDA expedited the approval of Pfizer’s emergency use authorization as early as January 13, but the first batch of Pfizer only arrived on July 21 with 560,000 doses. Did our decision-makers study the data of China’s vaccine trials in the United Arab Emirates, Brazil, Indonesia and Turkey which started in July 2020?

The Philippine FDA approved the EUA of Sinovac on February 22 but for some reason said it would not be for all medical frontliners. Interestingly, Philippine General Hospital Director Dr. Gerardo Legaspi was the first to be inoculated with Sinovac and strongly advised the Filipinos then that they should trust the experts. CNN Philippines, Philstar, Inquirer, Rappler generalized the critical statements of a group of doctors who doubted Sinovac, but after over 23 million Filipinos have been vaccinated, none of them have complained.

480,000 doses of AstraZeneca arrived later from the global alliance Covax, that the US embassy took credit as “US-supported” and most of the news didn’t report that US and Japan did not approve AstraZeneca for their own citizens and the batches delivered were near expiration. Now suddenly “extended life”‘ has been declared.

The bulk of the Pfizer delivery to the Philippines only came in August 2021 after US Defense Secretary Austin got Duterte to agree not to drop the Visiting Forces Agreement with the US — echoing the early complaints of Latin America nations that delivery of US vaccines were tied to concessions for US military bases.

China’s early delivery helped the Philippines ramp back our P2.4 trillion in economic output (per NEDA P600 billion/month) by opening months earlier, not including the lives saved and psychological impact on the whole country, far more than what former Socioeconomic Planning secretary Solita Monsod complained was only $20 million she estimated the first 1 million donations was worth.

Another “half-truth,” misinformation is the 50.4 percent efficacy of Sinovac, failing to give the proper context that this result was with medical frontliners under extreme exposure to the virus. The same vaccine in a larger study on 10.2 million Chileans found that it was 87.5 percent effective in preventing hospitalization and 86 percent effective in preventing death after two doses (New England Journal of Medicine). In contrast, the 90 percent efficacy for Pfizer was announced prematurely from “interim analysis” done on a much-lighter-exposure-risk demographic, clearly not comparable for any intelligent analyst. Recent reports are now saying the effectiveness of Pfizer drops to 44 percent six months after the second dose.

Hardly reported as well were nations that depended on the China vaccine on the whole have far less casualties percentages and are re-opening more smoothly even thru the whole India-variant (Delta), including many Asean countries, while the nations that depended on Western vaccines, i.e., Israel, Singapore, Australia, Germany, etc. faced several waves of re-lockdowns even after over 75 percent of their population were already vaccinated. Many of the mortalities, side effects, blood clotting, cardiac issues related to AstraZeneca and Pfizer are also not reported.

Rappler, et. al failed to report Pfizer raised its prices by 25 percent (and Moderna by 10 percent), becoming the highest revenue drug in history by the end of 2021 — about $33.5 billion for 2021 alone or that Pfizer CEO himself already said that a possible fourth booster shot may be needed, and AstraZeneca discourages its own vaccines for booster shots. The US FDA is fighting to conceal the data it relied on to license Pfizer’s Covid-19 vaccine until 2076. Constant-source-of-criticisms-on-Chinese-vaccines Reuters has for its CEO Jim Smith, who also sits on the board of Pfizer. Similarly, Dr. Tony Leachon was a Pfizer director for decades, which is often not mentioned by ABS-CBN.

Even after the Africa Health Research Institute said that Pfizer vaccine may be less effective against Omicron, the very recommendation that Pfizer and the others are worded as “booster shot recommended.” But when referring to the Chinese vaccine, the New York Times, Asia Nikkei, Fortune and several local media would say “two shots don’t offer sufficient protection.”

Foreign Affairs Secretary Teodoro Locsin Jr. says someone dropped the ball in securing syringes but fails to say that the problems of the syringes is also due to Pfizer delivering its vaccines without its exclusively-sized 0.3-ml syringes amid a 2 billion global shortage of the Pfizer syringes, just like how the Apple charger is made only for Apple products. This is like sending special made bullets without the gun.

Yes, it is true that our bureaucracy and procurement process continue to have structural challenges, and in fairness, the Department of Health admitted it ordered the 0.3-ml syringes in May 2021 from the United Nations, but just like many of our logistics problems, we should know by now that pledges and orders are not the same as delivered! Moderna, China’s Sinovac, and Russia’s Gamaleya use the standard 0.5 ml syringes, which are interchangeable with readily available syringes.

Yes, all vaccines help, and boosting can benefit, but for the media and information gatekeepers to state one positively while demonizing the other at a time when the challenge continues to evolve is a dis-service to humanity.

Jan Albert Suing has been conducting policy research for both the public and private sectors, with some of his works published in “Population Ageing in the PH: Issues and Challenges” and “Towards an ASEAN Parliament: Challenges and Prospects.” He taught at Far Eastern University and received his master’s degree in International Studies from the UP Diliman.