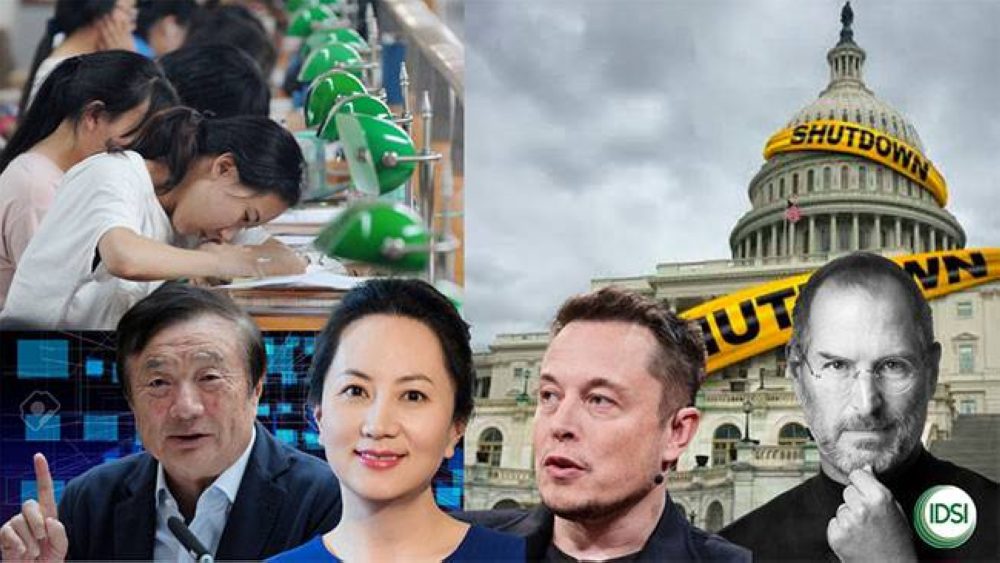 Simultaneous titanic domestic economic struggles are currently underway in the United States, China and the Philippines that will redefine their trajectories in the political and economic worlds for the next decade. Will these internal revolutions cause the countries to advance or decline?

The US is facing a dual financial crisis that may lead to a shutdown of government and a credit default, a first for the US, which will lead to recession, unemployment, and nonpayment of pensions and other obligations. A global financial turmoil will ensue akin to 2008 and lead to massive weakening of the faith in the US dollar and financial systems — unless the legislature approves the lifting of the ceiling on government borrowing above $28.4 trillion already owed by the US this October 18.

President Biden also has to battle with the Republican party over his $3.5-trillion social assistance proposals, which is considered by some senators as too lavish, on top of his more bipartisan $1.2 trillion infrastructure bill.

On the positive side, President Biden has demonstrated a style less brash than Trump, and is having America rejoin many of the world organizations that the US left under the previous president. Biden also immediately called to appease French President Emmanuel Macron’s anger over the $50-billion submarine sale poached by the US. However, this had France and Germany doubting the loyalty and leadership of the US and pursuing a separate potential security group centered among Europeans themselves, which is seen as weakening the US-led NATO.

Biden called on Chinese President Xi Jinping directly as well to discuss differences and cooperation and arranged for the release of Meng Wanzhou. Meng was detained for extradition per US instructions to Canada, although she had emails proving HSBC lied about being deceived and were informed about Iran transactions all along. She was ascertained to be not guilty by the Canadian court’s Judge Heather Holmes and was released, and the Canadian “Two Michaels” — Michael Spavor and Michael Kovrig — were released by China as well.

These and other actions showed the US is a determined competitor, willing to break rules and create more anti-China alliances based on “genocide” and “threat,” and to impose sanctions and property freezes on various countries not aligned with it for alleged human rights charges. But at the same times, these also showed the US’ willingness to talk practical reason and play ball.

Embattled President Joe Biden is surrounded though by US politics’ intense opposition on every domestic issue, on the pandemic’s science approach, and by US allies’ anger and feelings of betrayal by its recent actions, as well as continuous attacks by a gleeful Trump, Fox, CNN and nearly every talk show in the US.

The China government has caused many of its most successful enterprises to lose hundreds of billions of US dollars in market cap in a few months, and it has been criticized for this by business policymakers around the world. But it has been agreed with by social policymakers who believe the regulations, while possibly heavy handed, are in the right direction of not allowing a plutocracy and maintaining the continued focus of its people on manufacturing, “more productive, less frivolous” activity.

These are from its attempt to create a society of “common prosperity for all,” and to design perceived models for maintaining strong economic pillars for China for the longer term future — by government selection and support of industries and people’s attentions in certain sectors rather than the freewheeling competition of the markets that is creating a “winner-take-all” world, and the “excessive” extent of choices that may weaken the future productivity of society. What are these steps?

The Chinese government has stepped in to limit to 3 hours a week the time children under 18 years old can spend on video games, which have become “spiritual opium.” Major players like Tencent and NetEase have helped implement this and promoted more educational games in their stead.

To prevent wealth-based differences in education levels, tutoring-for-profit was given a few months to wind up, decimating large tutoring businesses. Entertainment beginning to create hit shows having non-traditional sex relationships were also to be avoided.

China pressured ride-hailing giants like Didi and Meituan — who have over 600 million rides a month, and are into moving, personal finance and other services — to assure periods of rest and benefits to gig workers and to limit use of data from riders.

Famously, Ant Financial of Alibaba was stopped from raising the largest IPO in the world, and was limited in its foray into microlending, wealth management and other services, to redirect what were considered monopoly-building power and potential for unmanaged disruption to financial institutions.

Meanwhile, the government has launched its own digital currency, the first major economy to do so, and cracked down on cryptocurrencies as risky speculations, heavy on unproductive energy consumption and prone to laundering.

This, plus a slew of deals with Russia, Iran and other countries to conduct trade in their domestic currencies and goods with the Chinese RMB without passing through the US dollar or the Swift clearing system, will diminish the capacity the US has used to sequester the funds of various countries and entities as well as monitor their movements.

Alipay, WeChat and other payment systems were asked to allow other systems to interconnect to their users.

A US federal judge recently forced Apple Inc.’s App Store to allow developers to send their users to other payment systems, but allowed Apple to continue to charge 15 to 30 percent for its in-app payments. In other moves, the US tech giants have been asked to monitor and manage political content and “filter out fake news” from social media. In similar moves to understand and manage the growing power of the tech giants, the US has been investigating the powers of tech giants Facebook, Amazon, Apple and Google.

The US had disallowed various mergers or purchases of tech companies or even for arms’ length purchases of products or services around the world, and it had limited the access of many Chinese companies to the US stock market. In response, the Chinese government has discouraged its major companies from continuing to list in the Western markets and has begun to focus its enterprises more inwardly for its resources, financing and markets.

China is attempting to redefine its whole decision system, in a scale never before done in the world, costing it over some trillion US dollars of market cap, to reflect that the (perceived) interests of society are the higher consideration above that of a free-wheeling capitalism that may undermine the longer term stability of its institutions in finance, economic structure and society.

The US is having to respond to pressures on its allocation of funds to projects, strength on unlimited printing of money, and decision making systems that have to deal with a lot of opinions but have generated unequalled creativity and innovations over the last 250 years.

China’s model, on the other hand, has generated unrivalled growth over the last 40 years.

Will the re-engineering of China on an overall basis lead it to continued world-leading pace of advancement in scientific, commercial creativity? To what extent is the price paid on individual choices going to be worth the cost in attracting talents and perspectives from around the world, restraining out-of-box original creativity, entrepreneurship and happiness?

Will the US pressures today lead to rekindling of the “can-do, will-do” spirit of the American pioneers, who sacrifice, explore and work like locomotives? Or will they freeze the country insisting on entitlements, political correctness, and then make up for shortfalls by imposing military, financial, and their own laws and standards on the rest of the world?

George Siy is a Wharton-educated industrialist, international trade practitioner and business community leader. He has advised the Philippine government and various organizations in negotiations with the Association of Southeast Asian Nations, Japan and the United States