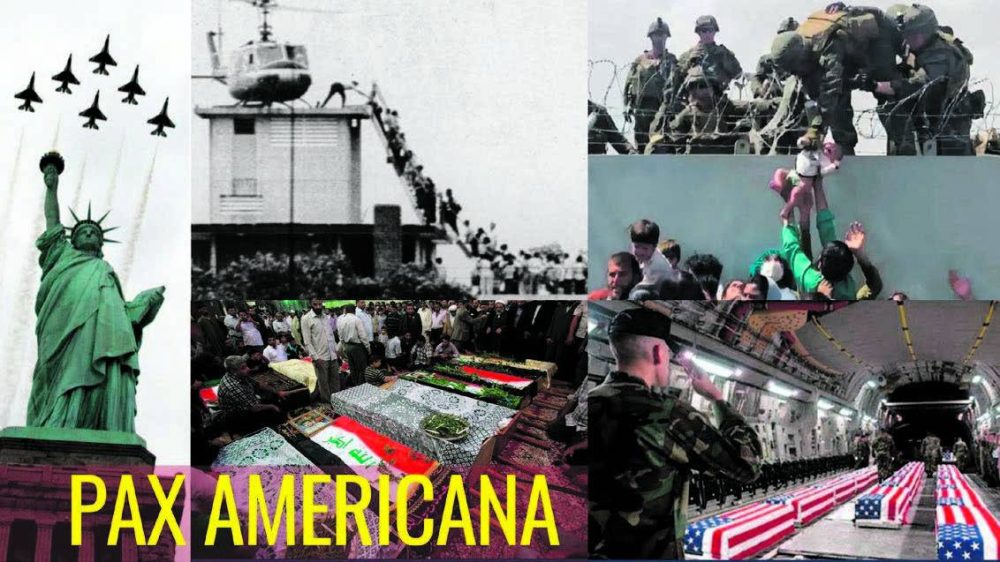 The earlier optimism after the Biden inauguration of promising America is back is now met with skepticism, following the rebound of Covid-19 infections and the Afghanistan withdrawal debacle.

Covid-19 has exposed the deep ideological divide within American society. One can even put the initial blame on the attitude of Trump in dismissing Covid-19 as nothing more than seasonal flu as what allowed the infection to run wild. The fact that most of the pandemic health measures divide the country is shocking. The Covid-19 pandemic is a major global crisis since the end of World War 2 that the US is not playing a key role in its resolution. US blocking and hoarding vaccines in the initial critical months that saw even the country’s democratic ally, India, being forced to turn its streets into morgues only reinforced that image. This failure hurts the standing of Pax Americana in front of the world.

The country has the most infections and mortality globally, making its much-touted science power and robust public health system a mockery. Moreover, the unexpected rebound of Covid-19 infection cases following the emergence of the Delta variant, first detected in India, in recent days raised questions again on the administration’s competence.

In addition, the twin problems of poor physical infrastructure and deep social division revealed the urgent need for domestic investment in these areas. Moreover, the government runs a budget deficit of $6.1 trillion or almost 30 percent of GDP in 2020 and 2021. Therefore, refocusing government resources on domestic spending is almost a certainty in the post-Covid-19 era.

The Afghanistan withdrawal debacle adds to the concern over the American leadership. While most people agreed that getting out of the longest war in American history, in Afghanistan, is justifiable, the execution has become a disaster in history.

Trump signed the 2020 Taliban peace deal with little consultation with its allies on the Afghanistan ground. The subsequent Biden pull out again ignores its NATO allies’ warning that humanitarian disaster is looming for such a self-imposed withdrawal. The American behavior of the two presidents reinforced the belief that American foreign involvement is shaped less by ideology or value judgment and more by self-interest. It went into Afghanistan in the first place out of self-interest, as the country was harboring the leader of al-Qaida, who attacked American soil (even though none of the 9/11 suicide bombers were from Afghanistan or Iraq).

The collapse of the Afghanistan government despite nominally a 300,000-strong army equipped with superior weapons, in less than 10 days to the much smaller and poorly equipped Taliban fighting force reflected the deep demoralization of the Afghan army and among the populace. Moreover, there is a deep sense of betrayal by Afghan supporters of the American cause.

The end of the Second World War marked the beginning of Pax Americana. The US economy was almost half of the world by the end of the war, and its carefully crafted Bretton Wood institutions set the post-war global economic order. Even with the USSR splitting the post-war world Europe into two camps and the Communist Party taking over China, it was clear that America was the dominant world power.

While earlier Pax Britannica and Mongolian empires claimed a larger territory, no country could get its ideas influencing so many countries and people as Pax Americana. The country’s dominant military, economic and technological power, plus the strength of its entertainment-industrial complex, catapulted the American influence to an unparalleled degree on others in human history.

Moreover, the country’s hold on innovative new technology allowed it to rebound swiftly from the series of crises from the Korean War of the 1950s to the Vietnam War in the 1970s and the Global Financial Crisis in 2008.

Overconfidence in oneself while the competitors rise

The breakup of the USSR in 1991 reinforced the belief in the invincibility of the American model. Fukuyama’s book The End of History and the Last Man reflected the ethos at the end of the 20th century.

But in reality, the unexpected demise of the USSR reflected the internal decay of the Soviets rather than the strength of the United States. Inside the country, many Americans continue to suffer from racism, widening income gap and social divide. In addition, its political system is increasingly paralyzed from democratic deficits such as pork-barrel politics and identity-based populism.

The prolonged war on terror and the global financial crisis that started in the American subprime meltdown highlighted the pervasive belief that America could not do wrong at the turn of the century. As a result, mistakes perpetuate and finally implode. By the late 2010s, it became apparent that the country cannot win the endless war on terror and optimism on its ability to keep global dominance was ebbing.

The emphasis of Trump on “America First” took many allies aback. He walked away from international organizations and agreements once his wishes were not accommodated and had broken the basic tenet of international relations. Moreover, imposing trade and currency sanctions indiscriminately and unilaterally had shaken the trust element important to the American leadership.

The rise of China is the first time that Pax America faces a peer competitor in all aspects of power, from economic, technology to military. China’s breakneck speed in closing the economic and technology gap through a singular focus on economic dynamism provided countries worldwide with an alternative growth engine in recent years. Trump’s focus on China reflected the insecurity of a country losing confidence to compete in the world whose rules it set.

The future of Pax Americana

Both Covid-19 and Afghanistan are epochal events exposing the weakness of the US. The future trajectory of the country depends on how it will address these weaknesses and regain the trust of the world. However, the rise of other countries and regional blocs such as China, Russia and the Asean means a more multipolar global order is forthcoming. Pax Americana as we know it will metamorphose into a new form befitting the national capacity of America in the new world.

For countries around the world, it is clear that one’s relationship with others is based more on the real world, with national self-interest at its core. Therefore, a country must be realistic about its interest and know who they are in the new multipolar global order. The best way to stay relevant is to have a robust economy and a united society.

A revealing video that explains why the US was in Afghanistan for over 20 years.